The recent sell-off in the greenback has seen the US Dollar struggling to maintain ground amongst its major counterparts as concerns surrounding low interest rates, ongoing US-China trade wars and the upcoming presidential election, all weigh in on the Dollar. Now, after 8 consecutive weeks of losses, the pair has now fallen into a critical level of support, with price action temporarily stalling at this level. Now, with Canadian PMI showing signs of a strong economic rebound, technical analysis indicates that, at present, price action may be conflicted so long as this level holds.

Since rebounding off of the March 2020 highs, the strong correction towards the downside has pertained, up until the current support level of 1.30608, the 61.8% retracement level of the primary move, came into play. 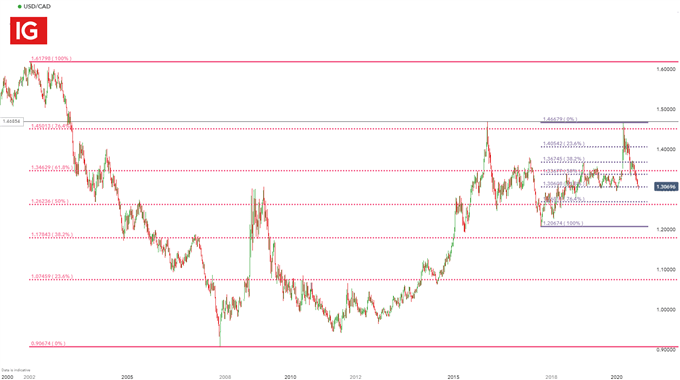 From a short-term perspective, on the four-hour chart below, the Moving Average Convergence/Divergence (MACD), which measures the momentum and direction of the trend, has crossed upward, below the zero line, a possible indication that the trend may reverse towards the upside. However, prices remain below the 50-period moving average, indicating that the trend is still favoring the bears, for now. 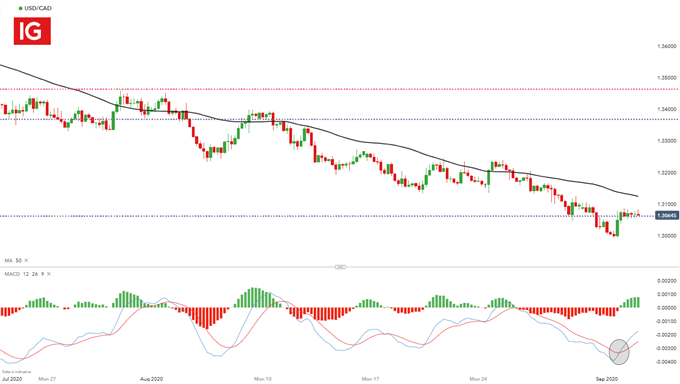 For now, as long as the current support level holds, a bullish continuation cannot be ruled out.A break above 1.306 could see price action favoring the bulls with 1.13677, the 50% retracement of the short-term move holding as resistance. Meanwhile, a break below, could see the 76.4% retracement level forming as support at 1.26811.

IGCS shows that, at the time of writing, USD/CAD client sentiment remains bullish, with 66% of retail traders holding long positions. We typically take a contrarian view to crowd sentiment and the fact that clients are net long, suggests that prices may continue to fall.