Japanese Prime Minister Shinzo Abe has resigned from his post due to health concerns. This has been brewing over the past few days but now has finally been confirmed. With almost 8 consecutive years of service Abe has been at the forefront of numerous policies, economic reform and much more for the island nation. Japan being an economic super power makes this news quite significant globally, and may well result in systemic ripples throughout financial markets. Today saw the Japanese Yen (JPY) and Nikkei 225 react quite significantly to the news which may extend further as there is still uncertainty around a successor and how this may affect current economic policies. How will the future pan out for the Japanese economy? 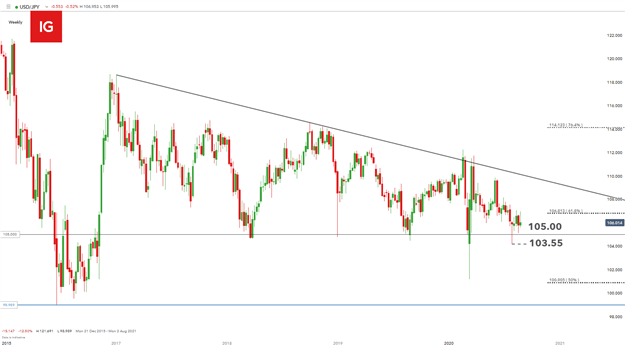 The US Dollar has given back much of its gains against the Yen after yesterday’s speech by Fed chair Jerome Powell at the Jackson Hole Symposium. The multi-year descending triangle is still in play as price action continues its path to support. The news of PM Abe’s resignation may result in further downside pressure as uncertainty prevails. Technically traders will look for the psychological level of 105.00 (yellow) as initial support after which the July 103.55 low may follow. 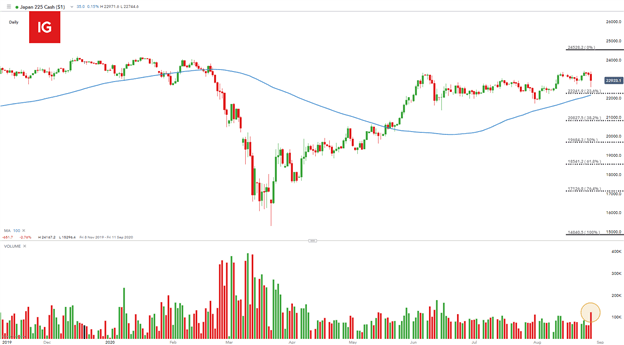 The Nikkei 225 reacted with a sharp sell-off in Japanese stocks. With volumes reaching new highs (yellow) as of June 2020, the near term upward trend has been disrupted. Stocks have given back much of its initial decline however, traders should proceed with caution as doubt around the future of Japan endures. Further downside may be eminent as the 22241.9 (23.6% Fibonacci) looms as initial support – Fibonacci taken from February 2016 low to October 2018 high. The 100-day Moving Average (MA) coincides with this level and support a break below this support zone may signal a bearish reversal. This potential reversal in momentum may be imminent but after a strong upward move since March 2020 lows, it may not be wise to be too decisive in judgment as the Japanese government will need to provide more clarity on the situation.

Japan and the UK have been in trade talks which are forecasted to conclude in September. This is a favorable deal for Japan as they are a major exporter to the UK and could allow Japan to avoid tariff increases on their goods. With Prime Minister Abe resigning, this may affect the deal with delays or even abandon the pact all together depending on what happens going forward. If the deal is aborted, Japan will see tariffs rise next year which could severely hurt Japanese exporters. Yen and Nikkei traders should keep a close eye on these negotiations as this may have substantial consequences for the country.

All eyes will be on Japan’s succession plan which will be the a main market driver going forward. Consensus amongst analysts and experts predict short-term uncertainty followed by a continuation of Abe’s current policies. Expansionary fiscal and monetary policy will persevere as the underlying foundation of Japanese policy as there is no real alternative to ‘Abenomics (weaker Yen with a strong stock market). Short-term downside we have seen on both the Nikkei 225 and USD/JPY may be short lived with further upside to ensue in the medium-term. A deviation from this – however unlikely, may cause a real stir in global markets.

IGCS shows retail traders are currently net long on USD/JPY, with 58% of traders currently holding long positions (as of this writing). At DailyFX we typically take a contrarian view to crowd sentiment, and the fact traders are net-long is suggestive of a bearish bias on the pair.