A recent surge in the number of Covid-19 infections in Victoria, the second largest state of Australia, has resulted in a reintroduction of restrictions; stalling the possibility of a swift economic recovery. Meanwhile,tensions between the US and China continue to escalate after President Trump imposed a September 15 deadline for the sale of Chinese-owned video company TikTok to an American company on condition that a large portion of the sale is paid to the US government.

From a technical perspective, although price action has favored the bulls since the AUD recovered from March 2020 lows, Fibonacci levels continue to provide strong levels of both support and resistance.

The monthly chart below highlights Fibonacci levels from two long-term major moves. The first retracement (pink) represents the historical highs and lows which have yet to be violated and is plotted between the March 2001 low and July 2011 high. The second Fibonacci retracement (blue) will be referred to as the secondary move and is plotted between July 2011 high and the March 2020 low. 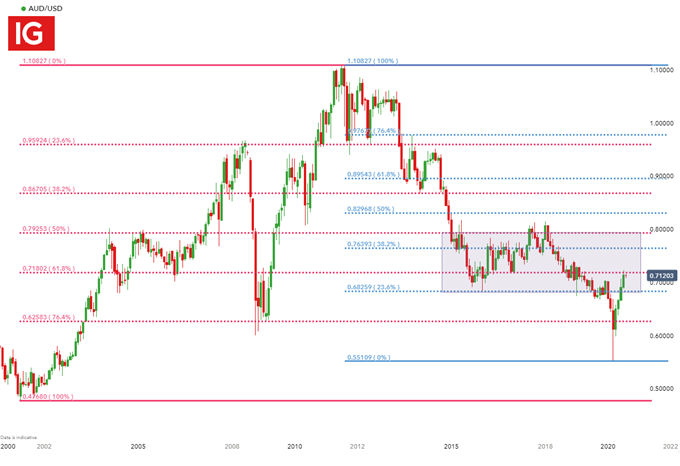 Since 2014, AUD/USD has spent much of the time between 0.7953 (the 50% retracement of the long-term move) and 0.68259 (the 23.6% retracement of the secondary move). These levels have provided strong support and resistance through much of this period until prices tumbled to March 2020 lows; after which price action soon returned back into this zone.

In the 4-hour chart below,the Moving Average Convergence/Divergence (MACD) indicator, which helps to measure both the momentum and the direction of the trend, remains above the zero-line, a possible indication that the pair is nearing overbought territory. But, the MACD is approaching the zero-line, suggesting that the momentum of the upward trend may be diminishing. 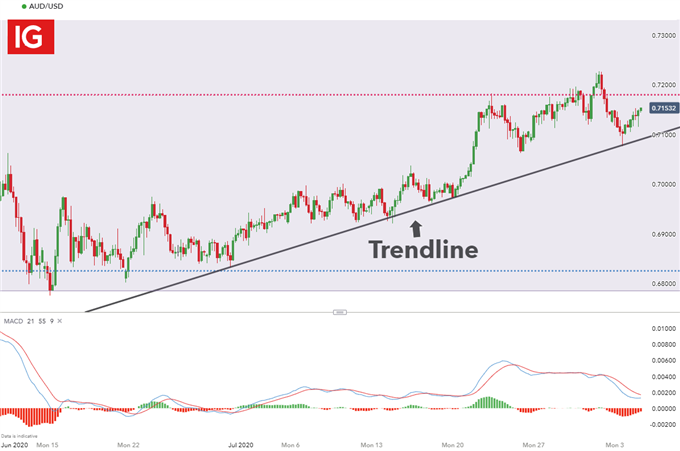 Following the RBA’s decision to keep interest rates unchanged, focus has now turned towards Friday’s economic events, which can be found on the DailyFX economic calendar, shown below.

In essence, the results provided on Friday will be an indication of the current economic conditions in both Australia and the US, the result of which may lead to an increase in volatility, and potentially drive price action in either direction.

Recommended by Tammy Da Costa
Can you plan for major news events?
Get My Guide 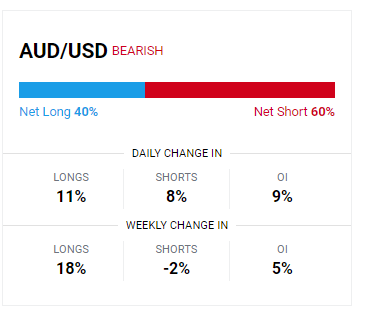 Recommended by Tammy Da Costa
What does client sentiment tell you?
Get My Guide

According to client sentiment, at the time of writing, majority of retail traders are showing a bearish bias towards AUD/USD, with 60% of traders holding short positions. We typically take a contrarian view to crowd sentiment, but the increase in net long positions suggests prices may continue to fall.