The Federal Reserve released its annual stress tests results Thursday afternoon, following a green day on Wall Street for big banks as certain provisions of the Volcker rule were rolled back to allow banks to invest in private markets more easily and lower margin limits for derivative trading. Overall, the Fed’s analysis concluded capital levels will hold up under several modeled scenarios. In Thursday's Wall Street session, before the stress tests results were released, the Financial Select Sector SPDR ETF (XLF) rose 2.65% in Thursday’s session, while the S&P 500 index gained 1.10%. A portion of those gains are pulling back in after-hours trading. Still, financials continue to lag the S&P 500 index year-to-date as investors worry over depressed interest rates and increased loan losses amid the virus-induced economic fallout. 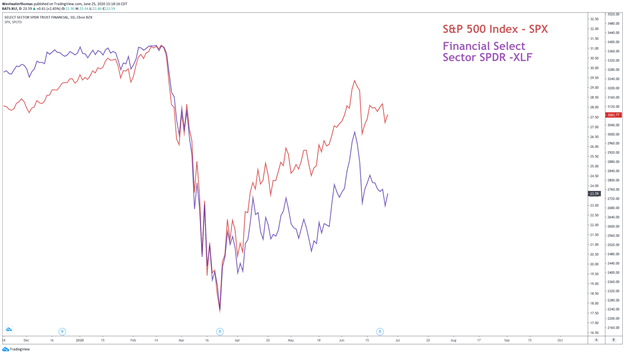 Alongside the conventional stress tests, in place since the 2010 Dodd-Frank Act, a “sensitivity analysis” was released in tandem with the annual results, designed to replicate three scenarios amid the COVID-19 pandemic. The Fed’s Vice Chair for Supervision, Governor Quarles, previously described these three scenarios as a rapid V-shaped recovery, a slower U-shaped recovery, and a W-shaped double dip recession recovery. Under the most adverse scenario, the 34 largest banks in the United States could lose $700 billion in loan losses. These results will be used “to inform our overall stance on capital distributions and in ongoing bank supervision,” said Governor Quarles.

Bank stocks dropped marginally on the report’s release. Specific results were not released, but in aggregate, the report concludes that banks are still well capitalized to weather future shocks. However, the Federal Reserve is implementing several actions following the results, including suspending share buybacks in the third quarter and limiting dividends. Vice Chair Quarles said, “the results of our sensitivity analyses show that our banks can remain strong in the face of even the harshest shocks.”

Even as bank stocks fell on the report’s release, Thursday brought several large events that could cause some volatility in bank stocks in the coming days, as investors digest the latest information. Moreover, the Fed states that some assumptions appear conservative. The main variables in the scenarios reflect changes in the peak unemployment rate, GDP changes, and the 10-year Treasury yield, among others. Going forward, the Fed stresses that the outlook remains highly uncertain and these results do not capture all possible scenarios.