The sentiment-linked Australian Dollar and New Zealand Dollars declined at first and Dow Jones futures slipped over 1.4 percent at one point. This is as the haven-oriented US Dollar and anti-risk Japanese Yen capitalized on traders shifting to prioritizing liquidity over seeking returns. Growth-linked crude oil prices also followed lower as anti-fiat gold prices traded sideways, balancing conflicting cues as Treasury yields declined but the USD gained.

US-China relations were souring prior to this headline, particularly over Beijing’s seemingly tighter grip over Hong Kong. Fears of a breakdown in the phase-one trade deal may raise the risk of tit-for-tat tariff escalation between the two. This would consequentially add further uncertainty to the outlook for global growth.

However, about half an hour later, Peter Navarro walked back his initial statement. He clarified, saying that the comment on China was ‘taken wildly out of context’. His initial points were ‘not about the phase-one deal, which remains in place’. Moreover, he claimed to be speaking about a broad lack of trust between the US and China. Risk appetite recovered, reversing most of the initial risk-off surge.

President Donald Trump then clarified further that the trade deal is ‘fully intact’, erasing fears of a breakdown as sentiment fully recovered (at the time of writing). 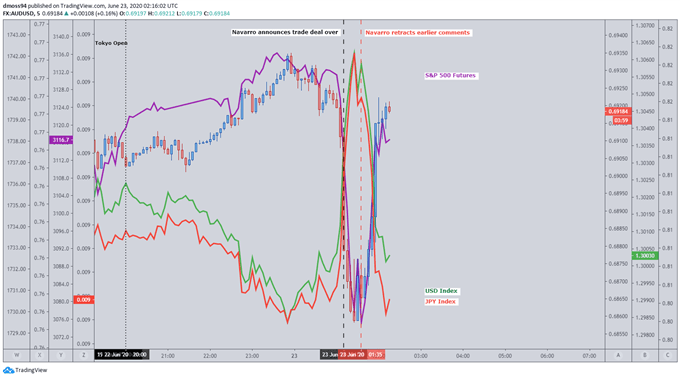 Dow Jones futures remain in a consolidative setting after prices first topped at the 27312 – 27624 inflection area, and then bounced off the 24507 – 24792 zone on the daily chart below. Prices are now testing the 20-day moving average and a confirmed downside close with follow-through could raise the risk of a broader reversal. That may place the focus on immediate support. 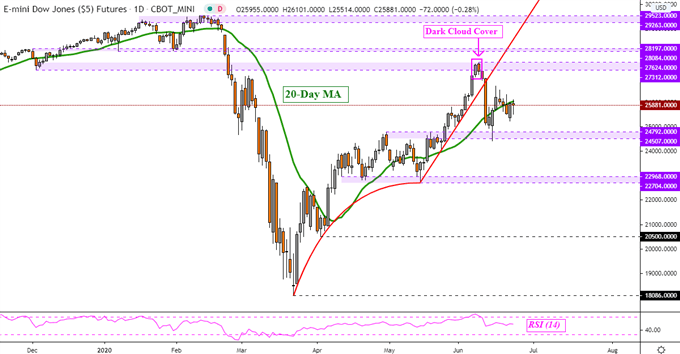 The Australian Dollar continues to trade sideways as AUD/USD pressures key rising support from March’s bottom. The 20-day moving average is holding up here as well and a push above 0.7032 exposes the 0.7064 – 0.7082 resistance range. Key support sits below at 0.6777 – 0.6840. A drop through the latter may open the door to a broader reversal. 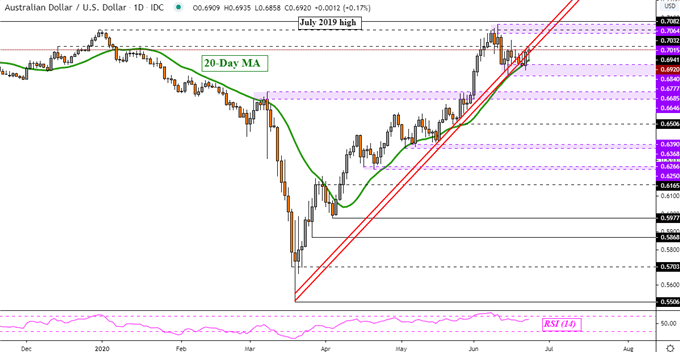