Recent employment data has taken the shine off the Australian economy, as the unemployment rate jumped to its highest level in 19-years and the participation rate fell to 62.9%, the lowest since January 2001.

With the economy shedding a staggering 835,000 jobs in the past two months Reserve Bank of Australia board member Ian Harper has called for an extension of the current JobKeeper and JobSeeker initiatives beyond the September 27 deadline. 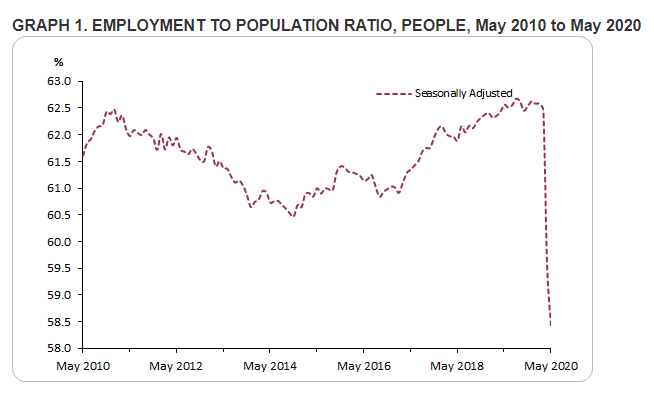 Alluding to RBA Governor Philip Lowe’s comments that the success of the economic recovery “will depend on the confidence that people and businesses have” Harper stresses that cessation of fiscal stimulus would be the “strongest form of Cold Turkey” and “would have a significant negative effect on consumer confidence”.

Speaking in a personal capacity, the RBA board member also hinted that “it would certainly be unhelpful” if the Australian Dollar “rate was back up over 70 cents, that’s for sure” after the recent 12-week surge pushed the commodity-linked currency to an 11-month high against its US Dollar counterpart.

The emergence of a second wave of the coronavirus remains the greatest fear for Harper due to the “devastating impact” the reimposition of lockdown measures “would have on public confidence”.

With daily new cases becoming a rarity in the majority of the Australian jurisdictions, the threat of an impending secondary outbreak remains minimal.

However, the recent surge of cases in Victoria may intensify underlying concerns as local states and territories continue to ease restrictions, with a sustained, systemic increase possibly fuelling a further decline in AUD. 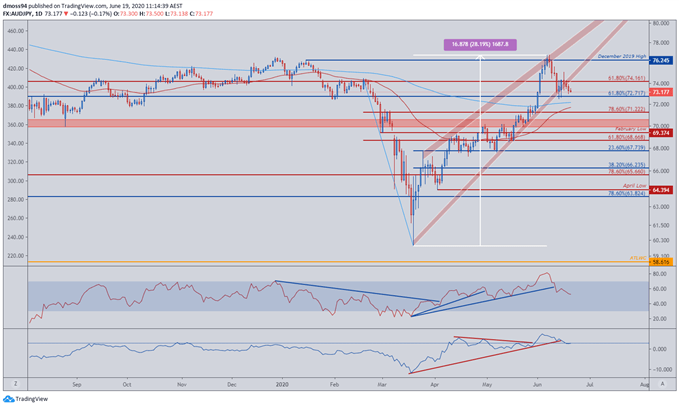 The Australian Dollar has surged as much as 28% from the March low (59.87) to set a fresh yearly high (76.78) on June 8, as the RSI strengthened into overbought territory for the first time since January 2018.

Resistance at the December high (76.25) proved to be a step too far for buyers as price slid back towards Rising Wedge support and the 61.8% Fibonacci (72.72).

Failure of price to close above test the psychologically pivotal 74-handle has seen AUD/JPY slice through the supportive trend extending from the yearly low (59.87).

With both the RSI and momentum indicators snapping their respective uptrends, an acceleration of the recent decline could be on the cards.

A daily close below the 200-day moving average (72.16) could open up a path for price to test support at the April high (70.17), with a close below the imposing 70-handle possible signalling a resumption of the primary downtrend. 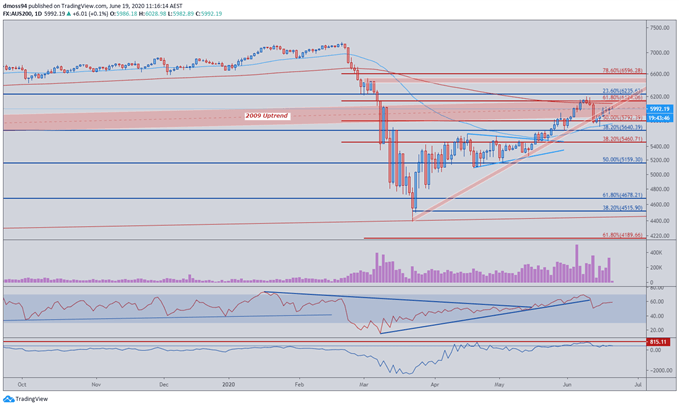 The ASX 200 has been grinding higher since slicing through the 12-week uptrend from the yearly low (4,387), with the 50-MA (5,756) serving as a springboard for price to retest psychological resistance at the 6,000-level.

As the momentum indicator continues to flatline the outlook for the Australian benchmark remains tilted to the downside, with the 200-MA (6,087) and 61.8% Fibonacci (6,124) region potentially capping upside potential.