The Australian Dollar collapsed after employment data shattered the relatively positive outlook portrayed by the Reserve Bank of Australia in its most recent meeting, as the unemployment rate climbed to 7.1% and the participation rate declined from 63.6% to 62.9% in May.

With the data portraying a more negative outlook than expected, market participants may begin to doubt the statement from RBA Governor Philip Lowe that it may be possible “the downturn could be shallower than expected”.

Exceeding market estimates of a -78,800 print, the Australian economy shed 227,000 jobs in the month of May with a 0.7% drop in the participation rate resulting in the unemployment rate not jumping as high as 11.4%. 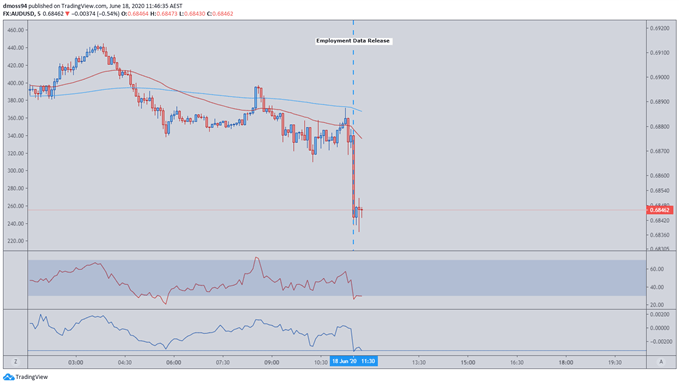 Beijing vehemently denies these claims, as expected, with foreign ministry spokeswoman Hua Chunying stating the report was “so imbued with ideological prejudice that it becomes an anti-China vanguard”.

China’s recent reactions towards criticism has, so far, resulted in the imposition of an 80% tariff on barley exports and, more recently, the recommendation from the Chinese Ministry of Culture and Tourism to avoid travel to Australia due to the increase of “racist incidents targeting Asians”.

It is yet to be seen if these recent accusations from Australia will be met with further retaliation. However, suggestions from Chinese local news outlet, the Global Times, may send shivers up the spine of the local mining industry as “it would be a big mistake for anyone to think that, despite its dependence on iron ore, China wouldn’t cut Australian imports”.

With iron ore exports to China worth upwards of $80 billion a year, a continued deterioration in this pivotal bilateral relationship could decimate an economy possibly entering its first recession in 29 years.

The recent rally in iron ore has helped to support the commodity-linked Australian Dollar, as the metallic rock surged 37% from the April low (562.9) to set a fresh 10-month high (772) on June 8.

However, price looks poised for a possible reversal as it fails to close above a key inflection zone extending from the July 2019 lows (759.1), with both the RSI and momentum indicators failing to follow price to higher highs and suggesting exhaustion of the 11-week rally.

Furthermore, a fresh injection of supply could see prices lose hard-gained ground as the world’s biggest producer, Vale, announced a gradual resumption of operations at its Itabira complex in Brazil, after a surge in employee COVID-19 cases forced the complex into hibernation on June 5.

A break of the uptrend from the April low (562.9) could see price retrace to the monthly open (728.1), with a daily close below support possibly carving a path back to the psychologically imposing 700-handle.

Should this deterioration in iron prices play out, it may fuel the recent decline in the Australian Dollar, as it continues to retreat from post-crisis highs against its major counterparts. 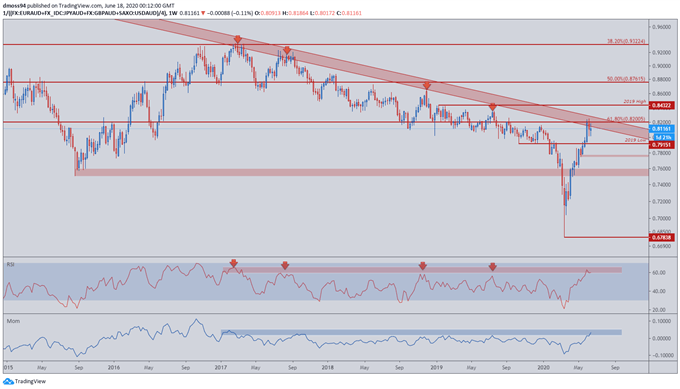 Looking forward, a relatively quiet period of economic data may draw attention to ongoing trade negotiations with the United Kingdom, as Australia moves to become the first nation to secure a trade deal post-Brexit.

Remaining confined by the 8-year downtrend from the 2012 high (1.1160), the Australian Dollar may begin to retrace its recent surge against its major counterparts, as the RSI and momentum indicators begin to turn at long-term resistance.

An eye should be kept on trade headlines, and local COVID-19 numbers, as negativity could fuel risk aversion, in turn exerting downward pressure on the commodity-linked currency.