AUD/USD Unfazed by RBA Minutes with Employment Report on Tap

The Australian Dollar drifted slightly lower after the release of the minutes from the Reserve Bank of Australia’s June 2 meeting.

The central bank kept the official cash rate and the target for 3-year yields at 0.25%. The ASX 200 surged as payroll figures showed a 1% increase in the month of May. 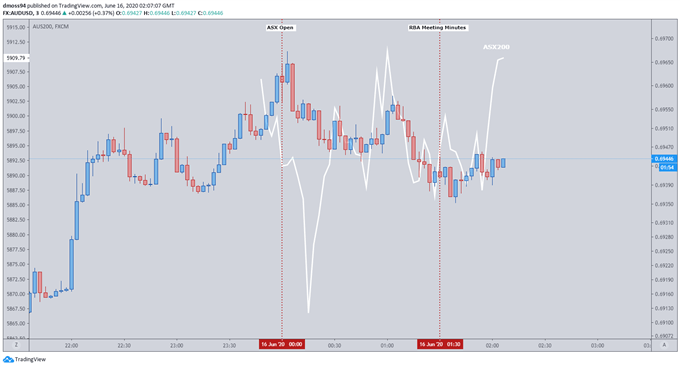 The Reserve Bank of Australia continues to maintain a relatively positive outlook, in comparison to its major counterparts. Governor Philip Lowe, and the committee, recognized that although the “Australian economy was experiencing the biggest economic contraction since the 1930’s” it is possible that the “downturn will be shallower than earlier expected”.

With the RBA’s policy package successfully helping to “lower funding costs and stabilise financial conditions” the central bank only had to purchase government bonds on “one occasion since the previous meeting”, although it remains prepared “scale up these purchases again, if necessary”.

Noting that its likely that the “substantial, coordinated and unprecedented easing of fiscal and monetary policy” would be required for the foreseeable future the “Board remains committed to supporting jobs, incomes and businesses” to ensure “Australia is well placed for recovery”.

Weekly payroll figures from the Australian Bureau of Statistics (ABS) showed an increase of 1% through the month of May. Despite showing a recovery from the April lows however, the steep drop in economic growth could continue to see the need for further fiscal and monetary stimulus.

The development Australia’s relationship with China, its largest trading partner, may continue to prove a significant headwind to the local economic recovery as tensions continues to escalate.

The imposition of an 80% tariff on Australian barley in May was followed up with a warning of a possible consumer boycott from China’s ambassador Chen Jingye, in retaliation to Scott Morrison’s call for an independent inquiry into the handling of the coronavirus outbreak.

Switching targets from goods to people, Beijing warned Chinese tourists earlier this month that they could possibly face racist attacks if they travelled to Australia and urged international students to reconsider study options.

Given the $18 billion at risk should Chinese tourists and students be persuaded to disregard Australia as a travel destination, salvaging this pivotal relationship will be paramount to preventing further downside pressure on an economy “experiencing the biggest economic contraction since the 1930’s”.

Looking forward, the end of the week brings about employment data with the unemployment rate expected to rise from 6.2% to 7%.

As lockdown restrictions continue to ease the participation rate could provide a glimpse into the progress of the labour force’s early stages of recovery, with expectations of a slight increase to 63.7% in May, after falling to a 15-year low in April (63.5%).