The New Zealand Dollar gained initially on Tuesday but it then sank as the Reserve Bank of New Zealand left borrowing costs on hold at record lows, as expected and expanded the scope of its Quantitative Easing program to try and mitigate the coronavirus’ effects.

It also said that it expects to see interest rates decline still further, raising the possibility of negative rates.

The central bank got its traditional remedial monetary policy action in early, slashing the Official Cash Rate three-quarters of a percentage point to a new record low of 0.25% back in March. There it stayed into May, but the Large Scale Asset Purchase program has been expanded to a potential NZ$60 billion, from its previous limit of $33 billion.

The RBNZ said that the expansion is aimed at cutting borrowing costs sharply and quickly, and that it remains committed to keeping such costs low for the ‘foreseeable future.’ It said it was prepared to add other assets to the purchase programme which currently involves domestic government and agency debt.

The central bank was predictably gloomy on growth prospects, seeing a Gross Domestic Product collapse of 21.8% for this year’s second quarter.

This was an unmistakably dovish statement despite the lack of a rate cut, and it has certainly weighed on NZD despite the initial reaction. 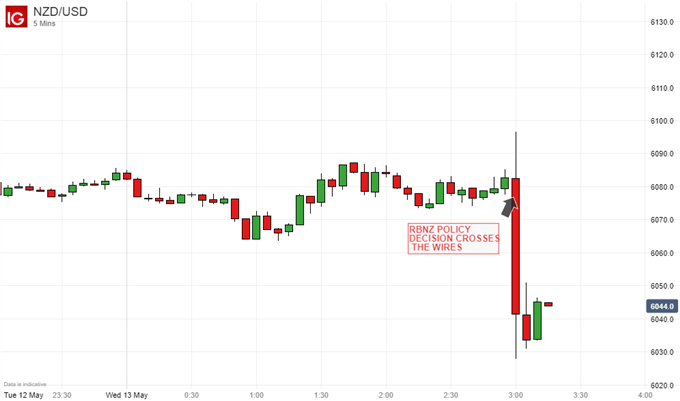 More broadly the New Zealand Dollar has risen from its March lows, as have most other growth-correlated asserts. Global authorities unveiled huge monetary and fiscal stimulus programs, led by the US Federal Reserve’s multi-trillion-dollar efforts. These have warded off immediate worries about a potentially catastrophic ‘credit event’ of the sort which saw US subprime markets implode back in 2008, and to that extent the markets’ response is understandable. 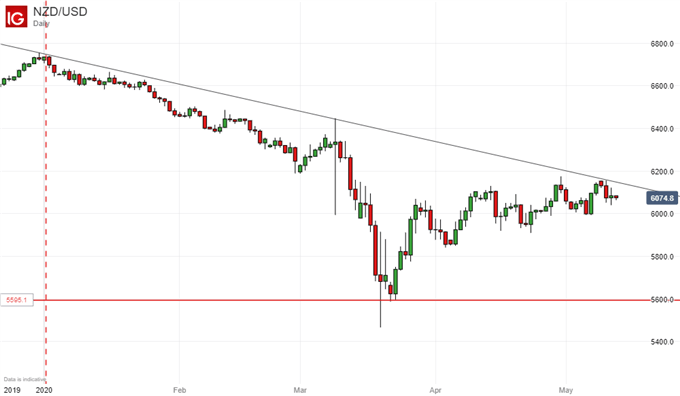 However, with national economies emerging from virus-induced lockdown cautiously if at all, second-wave infections feared and deep global recession assured, it’s equally unsurprising that the impetus behind those growth correlated assets should have waned.

NZD/USD remains stuck below this year’s dominant downtrend line, having failed to break above it on May 10 and 11. Clearly global risk sentiment will dictate the terms of this engagement, but any foray above it would probably have to be quite emphatic to keep sellers away now.