AUD and NZD Down, JPY Up as Markets Eye Coronavirus Earnings Hit

A new Asia Pacific trading week started off with risk aversion in the ascendant as investors fretted the likely heavy hit to corporate earnings dealt by the coronavirus’ awful spread. The anti-risk Japanese Yen made gains, while the growth-correlated Australian and New Zealand Dollars took an early hit, admittedly in markets thinned by Easter Monday holidays which saw major centers like Sydney and Hong Kong out of the game.

Open stock markets were lower, with the Nikkei 225 down more than 1% and the Kospi off by 0.75%. US stock futures also pointed lower.

Oil prices climbed on news that the Organisation of Petroleum Exporting Countries and its allies in the so-called ’OPEC Plus’ group had agreed production cuts, apparently ending the ruinous dispute on the subject which threatened to flood the market with cheap crude oil. Still, it’s by no means certain that such a flood would have been a bad thing in a world reeling from coronavirus, and end-demand for energy remains under heavy clouds. The bloc which includes Russia has agreed on reduction of 9.7 million barrels per day.

Goldman Sachs has already reportedly called the reductions too little and too late and still sees downside risk to its $20/barrel 2020 forecast, fearing that storage capacity will still be overwhelmed.

US earnings season will kick off this week, with first quarter performances from the major banks in focus. With interest rates now cut back to the bone all over the world profitability will be under the microscope.

Given all of the above it’s hardly surprising that the markets should have endured a cautious open. USD/JPY headed lower early but found Dollar bulls ready to defend psychological support at 108.00. 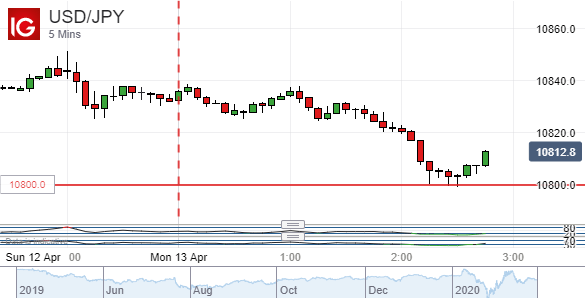 US crude oil prices have also risen on Monday but they remain well below the $31/barrel level hit in the immediate aftermath of the news that production cuts had been agreed. 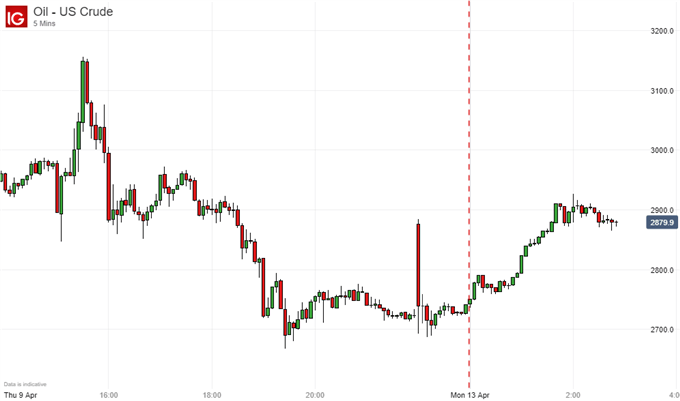