Bear Market Rally: With portfolio rebalancing out of the way, we feel current price action shows a truer reflection of the current risk appetite towards equity markets and given the current uncertainty, further downside remains likely. At the beginning of the week we had highlighted that equity markets were in a bear market rally and thus leaving market participants exposed to a bull trap given the surge in equity markets in the run up to month and quarter end.

Even in bear markets, nothing falls in a straight line with rallies possible in such an environment, particularly when central banks announce fresh stimulus. As a reminder, during the global financial crisis the S&P 500 rallied following the Federal Reserves QE1 announcement on November 25, 2008. However, the index had not troughed until March 2009. As such, we feel the equity market has not yet troughed and see risks of a retest of the lows despite the Fed’s recent announcement of unlimited QE as country lockdown measures impact the transmission of monetary policy.

Recommended by Justin McQueen
Download our Equities Forecast
Get My Guide 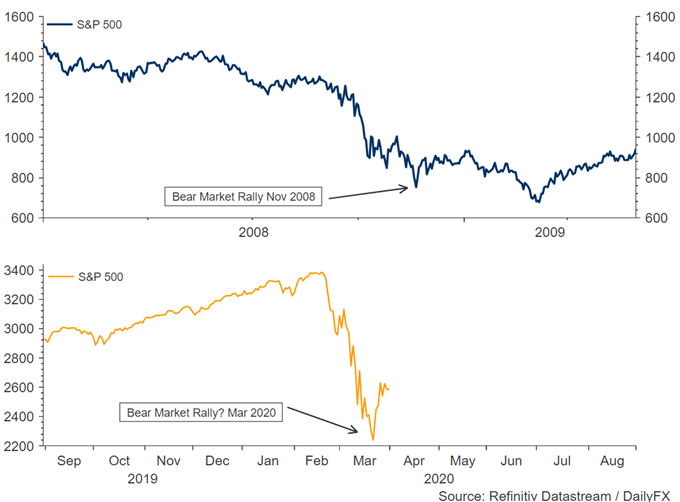 The Next Wave of Infections in China: Given that the number of coronavirus cases in the US, Italy and Spain have surged past China, market participants have been questioning the reliability of the actual number of coronavirus cases in China. However, with the country now expected to make a note of asymptomatic cases, which refer to people who have tested positive for the virus without displaying any symptoms, there is a rising risk another second wave of virus cases in China. In turn, this may put renewed pressure on global equities, particularly local equities (Chinese indices), which have thus far outperformed developed markets. The renewed bearish pressure could also be expressed via the Australian Dollar (AUD/JPY bearish), which is typically recognized as a liquid proxy to Chinese sentiment.

Having rejected the 38.2% Fibonacci retracement, the S&P 500 is back on the slight with initial support seen at 2470, where break below leaves the index vulnerable to a retest of the December 2018 lows at 2315. Overnight, President Trump announced that the worst impact of the coronavirus will occur over the next two weeks, which in turn raises the likelihood that we could revisit the bottom at 2184. 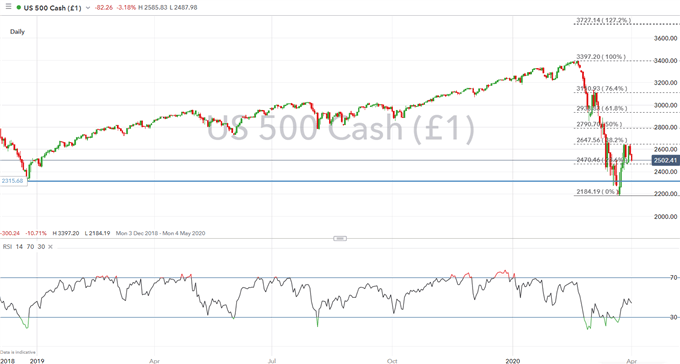 Much like the S&P 500, the Dow Jones has also rejected resistance at the 38.2% Fibonacci retracement, while the rising trendline from the global financial crisis low had capped gains in the index. Consequently, eyes are for an initial test of support at 20,900 before another lock below 20,000 as the bear market rally unwinds. 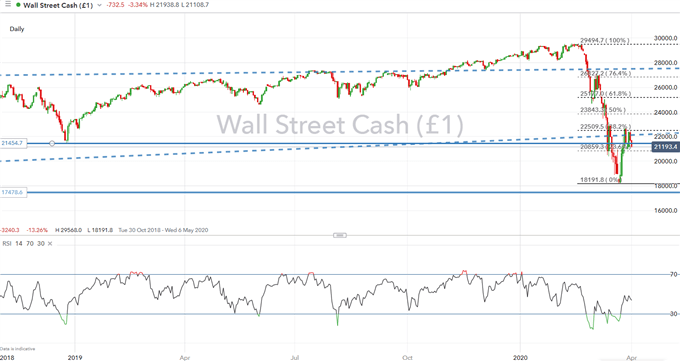