GBP/USD at risk of further losses

GBP/USD and the GBP crosses rose Thursday after a 7-2 decision by the Bank of England’s monetary policy committee (MPC) to leave its benchmark Bank Rate at 0.75%. Its purchases of government bonds were left at £435 billion and of corporate bonds at £10 billion.

Prior to the decision, the market-implied probability of a reduction was close to 50% meaning an even split between those who were expecting a reduction and those seeing no change.

However, the move is unlikely to boost Sterling long-term and it could well extend its recent losses ahead of and perhaps after Brexit at 2300 GMT Friday. Eyes will then turn to the EU-UK trade talks during the so-called transition period that will last until the end of 2020. 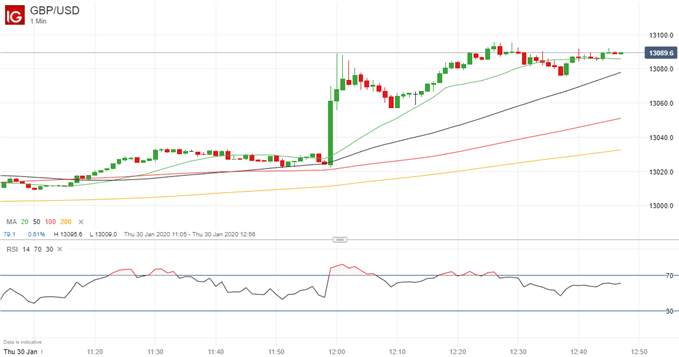 As explained here, a rate cut had previously been widely expected due to UK economic weakness but the latest purchasing managers’ indexes were more positive, with the manufacturing PMI rising in January to its highest since April last year and the services PMI to its highest since September 2018. However, the MPC will have weighed this improvement against a possible global economic downturn caused by the coronavirus and uncertainty about the course of the EU-UK trade talks once Brexit takes place.

Today’s was the last meeting chaired by Mark Carney, who will be followed as BoE Governor by Andrew Bailey on March 17, just ahead of the next MPC meeting that ends on March 26.

In its quarterly Monetary Policy Report, the Bank hinted that a rate cut could still be on the agenda, saying that "policy may need to reinforce the expected recovery in UK GDP growth should the more positive signals from recent indicators of global and domestic activity not be sustained or should indicators of domestic prices remain relatively weak."

Its latest forecasts see inflation staying below the BoE's 2% target over the next three years if rates stay at 0.75%. BoE forecasts based on market expectations of a cut in rates to 0.5% this year show inflation rising slightly above target.

Carney warns about the future

Speaking at a press conference after the decision to leave all the BoE's monetary policy levers unchanged, Carney said survey data suggest UK economic activity has picked up sharply since the General Election late last year. However, caution is warranted even though global growth is also picking up.

Coronavirus is a reminder to stay vigilant, he said, and although early signs are encouraging, recoveries in UK growth and inflation are not yet assured. Monetary policy may therefore need to reinforce the expected recovery in UK growth if the more positive signs are not sustained.

Some modest tightening might be needed, though, if the economy recovers as forecast.