GBPUSD saw some swings in the morning session ahead of a packed day for sterling, with focus on retail figures, BoE rate decision and the Queen’s speech. Cable prices rose 0.4% in the early hours of trading before hesitantly falling back in line with the opening level, before bouncing back to above 1.3130 in reaction to the BoE’s Monetary Policy Committee leaving rates unchanged at 0.75% and signalling towards a recovery in global growth.

But the pair quickly corrected and fell back in line with the 20-day moving average around 1.3093 as the pair continues its range trading heading in to the low volume end of year period. 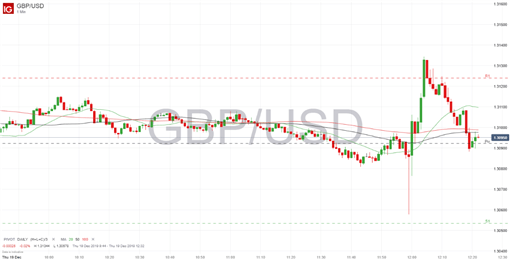 The key takeaways from the latest meeting are that the split between members remained as 7-2 as they focus on the next round of Brexit negotiations. They mentioned that they were unable to yet measure the impact of the election result on the economy, given that no hard data has been published since then. The material impact on economic data will not be measurable until December and January figures are published in the new year, which means the MPC is likely to remain neutral until the end of the first quarter if no significant unexpected changes take place.

Regarding economic growth, they pointed out that global growth has shown signs of stabilising with global financial conditions remaining supportive. But the labour market is showing signs of loosening, albeit remaining tight. Given an expected drop in inflation in the first half of 2020, the committee concluded that monetary policy could respond in either direction to changes in the economic outlook to ensure a sustainable return of inflation to the 2% target.

Inflation figures released on Wednesday showed that consumer prices remained stable in November, with the CPI figure coming in unchanged at 1.5%, above expectations of 1.4%, but core inflation fell 0.1% brining the annual figure down to 1.1% from 1.4% in the previous month.

November retail sales figures released earlier this morning provided another slump in economic data for the UK, with much worse readings than expected across the board. Core retail sales fell by 0.6% in the month of November, bringing the yearly figure down to 0.8% from 2.7% in the previous month. The reading for the month of December will be a figure to watch out for, signalling to consumer sentiment after the election outcome and possible end to the Brexit uncertainty, especially given the expected rise in spending during the holiday period.

After the result of the general election last week, the Queen attended parliament today to give her traditional speech when introducing a new government, which will set out their planned agenda. The event started at 1130 GMT, but it is expected to continue throughout the afternoon as more than 20 bills will be announced. Key focus will be on news regarding the government’s updated plan on Brexit, given Boris Johnson’s stance on not extending the transition period regardless of the state of trade deal negotiations.