The European Central Bank’s Governing Council confirmed predictions Thursday by leaving all its benchmark interest rates unchanged: the deposit rate at -0.5%, the marginal lending rate at 0.25% and the refinancing rate at 0.0%. There was also no change in its asset-purchase program, which restarted in November at €20 billion per month.

In a statement, the ECB said it expects interest rates to remain at their present or lower levels until it has seen the inflation outlook converge robustly to a level sufficiently close to but below 2% within its projection horizon and such convergence has been reflected consistently in underlying inflation dynamics.

As for its asset purchases, the ECB said it expects them to run for as long as necessary to reinforce the accommodative impact of its interest rates and to end them shortly before it starts raising interest rates.

Speaking at her first post-decision press conference, new ECB President Christine Lagarde said the ECB would conduct a strategic review starting in January. However, she gave few more details beyond saying it should be completed by the end of 2020.

Meanwhile, ECB staff projections for both GDP growth and inflation were little changed from the September projections although Lagarde said that economic data point to continued muted inflation pressures and signs of stabilization in the slowdown of Eurozone economic growth.

Highly accommodative monetary policy was still needed, she added, with the risks to growth tilted to the downside. She also urged Eurozone governments to ease fiscal policy.

In response, EUR/USD was barely changed. 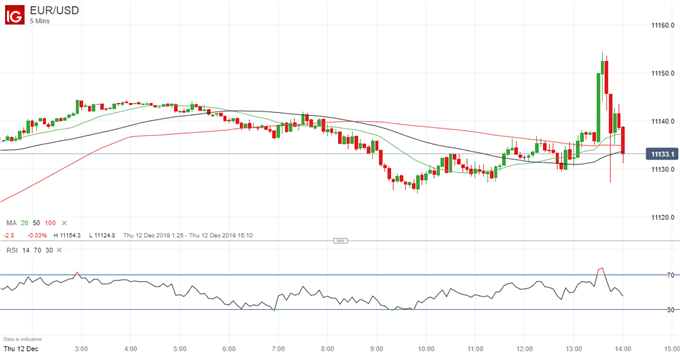 In the money markets prior to the latest rate decision, the implied likelihood of the deposit rate being left at -0.5% was 83%, with a 17% chance of a small cut to -0.6%. The markets also implied that the rate would still be close to its current level at the end of 2020 and that remained the case after the decision.