GBP at risk of setback

Nigel Farage’s Brexit Party looks to be in trouble ahead of Thursday’s UK General Election, with support for it down to around 3% in the opinion polls – a level that could leave it with no seats in the Westminster Parliament. The clear implication is that Farage’s decision not to stand candidates in the 317 seats won by the ruling Conservatives in 2017 has backfired as UK Prime Minister Boris continues to repeat his Get Brexit Done mantra.

This has undermined the Brexit Party’s raison d'être, with the electorate seemingly convinced that Johnson will agree a trade deal with the EU and then leave the bloc at the end of 2020. Currently, the latest polls suggest the Conservatives have a lead of between 6% and 14% as Labour’s focus on the National Health Service seems to have failed to gain traction. 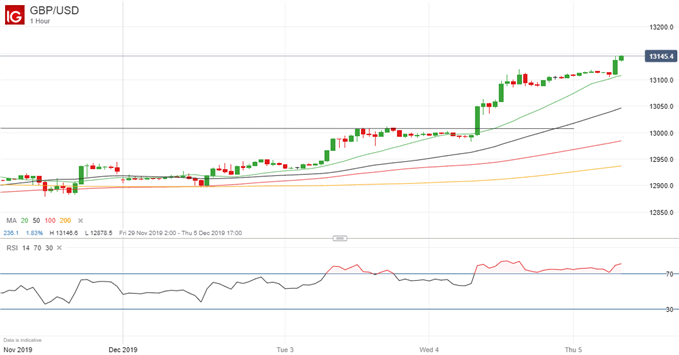 In the markets, the surge in GBP/USD over the past month implies that an overall majority for the Conservatives is now fully priced in. That, in turn, suggests that if the ruling party fails to win that majority, the pair could drop sharply once the results are known in the early hours of Friday morning.