As expected, the FOMC cut borrowing costs for a third time this year, with Chairman Jerome Powell emphasizing that the decision to move rates lower was unified. While the US Dollar initially rallied, it quickly declined while equities rose during Mr. Powell’s press briefing. He said the rate cut is to act as an insurance against downside risks against the backdrop of global disinflationary pressure.

A key point was when Mr. Powell said that a “significant” rise in price growth would be required before hiking rates. While the central bank anticipates for the economy to grow at a moderate pace, trade conflicts continue to weigh on business confidence and investment. Global growth prospects are dwindling as the US and China struggle to ratify “Phase 1” of their multi-sequential trade agreement.

In the interim, the uncertainty will likely continue to sap inflationary pressure and could ultimately force the central bank to cut interest rates again. Reaching a “Phase 2” would also not necessarily boost inflationary pressure. To quote Mr. Powell, it would take a “sustained” period of thawing diplomatic relations to help restore business confidence.

Even if Beijing and Washington were able to reach an accord, the positive impact from reduced tensions would take time to show up in the data and give the Fed impetus to raise rates. In the meantime, equities and emerging markets are cheering the prospect of easing credit conditions. However, it may only be a matter of time until hope for liquidity will not be able to comfort investors as they look into the abyss of eroding fundamentals.

Q3 earnings for Samsung Electronics – one of the biggest semiconductor producers in the world – are expected to show ₩7.7 trillion (South Korean Won), a 56 percent decline relative to third-quarter profits in 2018 at ₩17.57 trillion. However, Q3 earnings will be higher than the second quarter of 2019 where the company posted a ₩6.6 trillion profit. See Samsung’s earnings guidance for 3Q 2019 here.

South Korea is the largest semiconductor chip producer in the world whose export-driven economy is being afflicted by weakening demand, particularly in its core industry. Year-to-date, the company is up approximately 17 percent, though the chipmaker may now soon face competition from China. Beijing has created a $29 billion semiconductor fund which could not only hurt Seoul but strain US-China trade talks.

To learn why, tune into my weekly webinar where I outline geopolitical risks affecting cross-asset classes in the week ahead. 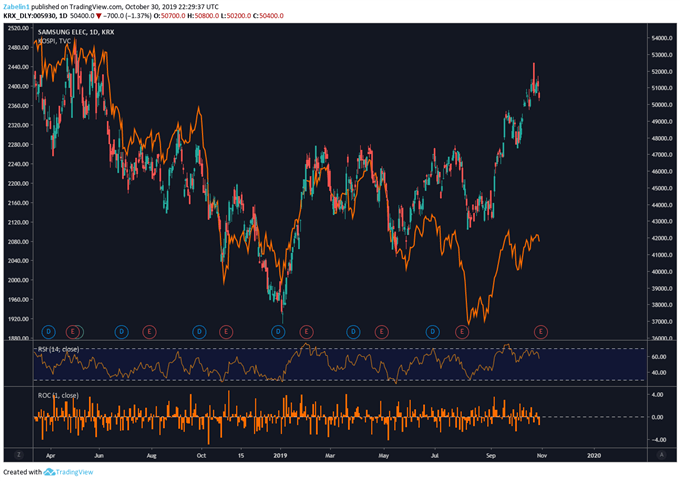 China’s manufacturing PMI is expected to show another contraction at 49.8 as the country struggles to revive growth amid its trade conflict with the US. As its largest trading partner, weakening demand of China undermines South Korean growth prospects as they contend with their own trade war with Japan. KRW may therefore suffer against USD and JPY if risk aversion stemming from growth fears ensue.

Markets will also be closely watching the release of Core US Personal Consumption Expenditure (PCE) data in light of the Fed’s recent interest rate move and subsequent commentary. This indicator in particularly is heavily watched because of Fed’s fondness and use of it in its policy calculations. PMI data may also stir cross-asset volatility if it shows supply-chain managers are still worried about the growth outlook.