The US Dollar may rise against the Brazilian Real and emerging market FX if the Fed delivers a third rate cut but spooks markets in its explanation for why it is undoing last year’s tightening cycle. USD/BRL’s rise may be amplified by Banco do Brasil’s (BCB) intended rate cut and gloomy commentary that will likely carry even more worrying undertones as Latin America’s largest economy struggles to grow amid a “synchronized slowdown”.

Overnight index swaps are currently pricing in an over 90 percent probability of another 25bps cut from the central bank, but the Fed may fail to deliver the ultra-dovish outlook markets are so desperate for. Chairman Jerome Powell has repeatedly stated that monetary authorities are not operating based on a preset course but rather will adjust policy in accordance to prevailing economic conditions. In other words: data dependent.

For investors, this is the proverbial kiss of the death because equity markets have been ballooned from the prospect of easing credit conditions as the fundamentals erode. If the steward of the most-liquid currency in the world undermines the market’s dovish expectations, investors could panic which may result in capital shifting from risky investments – like emerging markets – to haven-linked assets like Treasuries and USD.

Markets are expecting for the BCB to slash the benchmark Selic rate by 50bps after monetary authorities cut borrowing costs by a similar degree at the last meeting. While officials expect a gradual recovery, “the high level of economic slack may continue to produce a lower-than-expected prospective inflation trajectory” which may therefore require additional monetary stimulus.

However, officials have acknowledged that the trend of global credit easing has created a “favorable environment” for emerging markets. This has in turn helped to alleviate the pressure for monetary authorities in these frontier economies to cut rates aggressively. Having said that, Brazil is still suffering from weakening demand out of China – its largest trading partner – and domestic turmoil from the pension reform debate.

An overhaul of the country’s bloated pension system is widely thought to be necessary if Brazil wants to stave off a recession. Businesses have repeatedly attributed their reluctance to expand their enterprise in large part due to the uncertainty over the government’s ability to pass these structural reforms. A major break-through occurred recently, but it remains to be seen if it will be enough to insulate the economy from global turmoil.

As forecasted, USD/BRL has continued to decline after it broke below the lower layer of a congestive zone and is now targeting a possible floor at 3.9190. However, much like with USD/KRW, USD/BRL’s decline may be cushioned by the FOMC rate decision and subsequent press briefing if it spooks markets and puts a premium on liquidity over returns. We could see the pair attempt to re-test the previous digestive area. 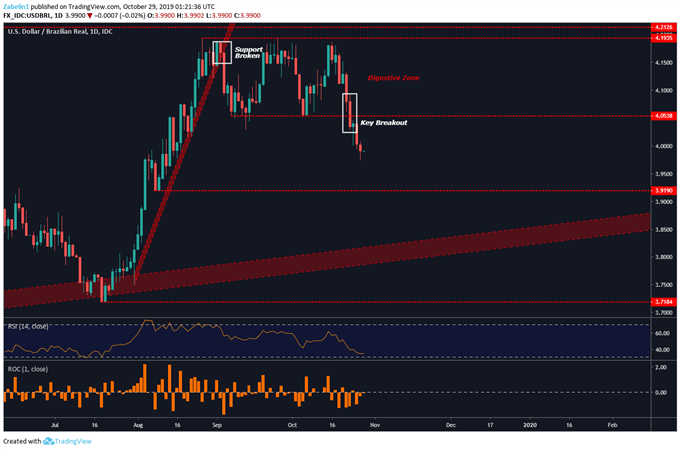