Yen, Franc Up as Pound Drops on Brexit Bedlam But Stocks Hold Up

The anti-risk Japanese Yen and US Dollar rose while the British Pound plunged against most major currencies after UK Prime Minister Boris Johnson failed to secure the votes needed to pass the Brexit deal he struck with the EU. Parliament opted to withhold a definitive decision on the proposal.

The sentiment-driven Australian Dollar weakened as worries about European political instability soured the market-wide mood at the Monday APAC trading open. The Euro was also pressured while the Swiss Franc – a frequent regional haven of EU turmoil – dutifully rose. 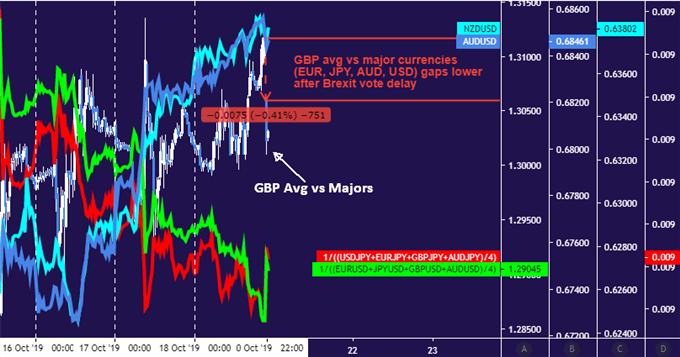 The way forward appears clouded. Mr Johnson sent the EU an unsigned request for an extension of the Brexit timetable along with another letter arguing against postponement. The latter seems to reflect the Prime Minister’s dogged intent to withdraw from the EU by October 31, no matter what.

Johnson is expected to make another push for a “meaningful vote” on his Brexit deal on Monday. Government ministers struck an optimistic tone on Sunday, saying they now expected to have enough support to get a favorable outcome.

Nevertheless, the Operation Yellowhammer contingency plan preparing the administration to deal with the fallout of a no-deal Brexit at month’s end was activated. The EU is reportedly prepared to offer an extension and may even push for a longer one. That seems anathema to Mr Johnson however.

Financial markets seem willing to give policymakers the benefit of the doubt for now. Bellwether S&P 500 stock index futures are tracking conspicuously flat, suggesting that a sweeping risk-off shift in prevailing sentiment trends is probably not in the cards immediately.

That might reflect expectations that global central banks – and most importantly, the US Federal Reserve – will move to expand monetary stimulus more readily against the current backdrop. Indeed, Treasury bond yields fell alongside Sterling as Monday’s session got underway.

The dividend yield on global equity averages around 2.5 percent, making stocks appear more attractive than cash on debt as the relative return on both collapses. Absent a crisis-level liquidation across the asset spectrum, this seems to be enticing enough to underpin sentiment, at least for the moment.