The New Zealand Dollar received a cautious boost, rising as much as 0.3 percent against the US Dollar following a set of better-than-expected local GDP data. In the second quarter, New Zealand’s economy expanded 2.1 percent year-over-year versus 2.0 anticipated. This is slower than the 2.5 percent pace achieved in the previous quarter.

Quarter-over-quarter, New Zealand GDP clocked in at 0.5 percent against the 0.4 consensus which is also slightly slower than the 0.6 prior outcome. These upside results fall in line with the trend of local economic data tending to outperform relative to economists’ expectations according to the Citigroup Economic Surprise Index.

Local front-end government bond yields tick higher, indicating the data cooled Reserve Bank of New Zealand easing bets. According to overnight index swaps, the markets are not anticipating an additional 25-basis point interest rate cut until perhaps November, and that is with only about 64 percent probability.

The NZD/USD struggled to sustain its rise and that likely owes to what could be more pressing fundamental risks in the near-term now that the Federal Reserve delivered its rate cut earlier. Later this week, the United States and China are due to restart trade negotiations. For the pro-risk New Zealand Dollar, the outcome of talks could bring with it elevated volatility as traders hesitate to commit to large bets for now.

On a daily chart, NZD/USD is still holding on to its downtrend since the middle of July. It is being held together by a descending channel of resistance – red parallel lines on the chart below. We do have the potential for positive RSI divergence to form should prices surpass the lows from the end of August. That would signal fading downside momentum and may precede a turn higher. 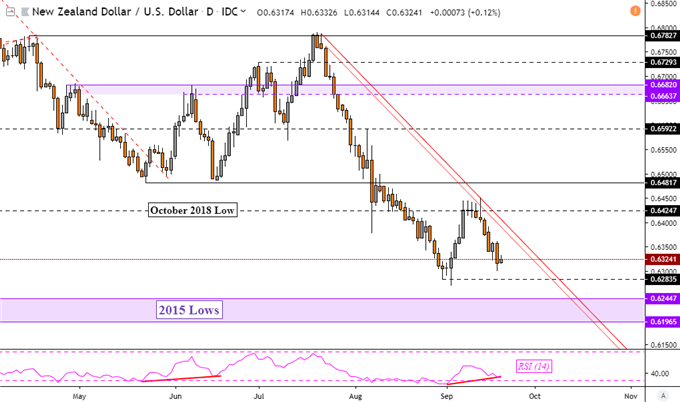