Asian stocks were broadly higher Friday as trade headlines between the US and China continue wholly more benign and as regional investors respond to the stimulus delivered Thursday by the European Central Bank.

US President Donald Trump said on Thursday he’d consider an interim trade deal with China, even though he’d prefer to reach a full agreement. This is a clear change in tone from the language of escalating tit-for-tat tariffs

The Nikkei 225 was up 1% as its afternoon session got under way, with big names Softbank and Fast retailing both up by more than 2%. 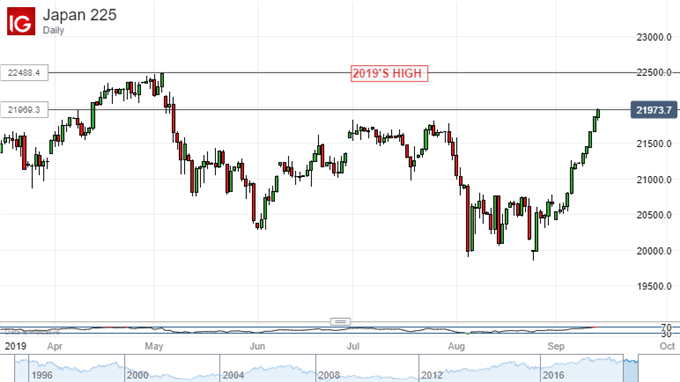 The index is now back to highs not seen since May 6, and within striking distance of the year’s peak made only a few days before that.

Hong Kong’s Hang Seng added 0.3% with life insurer AIA the standout gainer. Australia’s ASX 200 has shared in the day’s gains but the general improvement in risk appetite has weighed on gold miners Newcrest Mining and Northern Star Resources. The All Ordinaries gold index was down nearly 3% on the day. The ASX as a whole was up 0.2%.

Markets in mainland China and South Korea were out Friday for the mid-autumn break.

With perceived haven assets again friendless the Japanese Yen remained under broad pressure, with USD/JPY hovering near six-week highs. The pro-cyclical Australian and New Zealand Dollars have both started to do better this month as risk appetite as held up and both made further gains Friday.

The rest of the session offers investors a look at US retail sales data and the University of Michigan’s consumer confidence roundup. Next week will probably belong to the US Federal Reserve which will give its September monetary policy decision on Wednesday. Markets are almost certain that lower rates are coming, with the probability of a quarter point cut now more than 90% according to the Chicago Mercantile Exchange’s Fedwatch indicator.