South Korean equities were the only exception to this rule as the day wound down. Seoul said on Thursday it was cancelling a intelligence-sharing pact with Tokyo related to North Korea as an increasingly angry trade dispute between the two East Asian economic giants drags on. South Korean defense stocks got a lift but the Won continued to head lower.

The Kospi was down just 0.1% as its afternoon session got under way and appeared to be paring losses. The Nikkei 225 was up by 0.3% lead by big industrial names like Kawasaki Heavy and Mitsubishi Electric, the Shanghai Composite had added 0.4% with the Hang Seng up by a similar amount. Markets are hoping for a commitment from the world’s central bankers to support an uncertain global economic backdrop with more stimulus. There are question marks over those bankers’ commitment to deliver in the sort of quantity markets might like, but at least they seem set to be dispelled either way soon enough.

The US Dollar had a steady Asian session as the markets hunkered down for Mr. Powell. The New Zealand Dollar got a lift from the head of its central bank. Reserve Bank of New Zealand Governor Adrian Orr proclaimed himself ‘pleased’ with where interest rates were at. This seemed to reassure Kiwi bulls shocked earlier this month by the RBNZ’s surprisingly aggressive half-percentage point interest rate cut.

NZDUSD has been pressured like other pro-cyclical asssets since late July by recession worries and trade-war fears. That rate reduction only served to diminish its allure further. 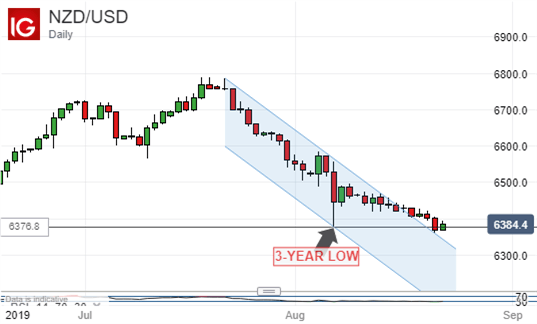 Still, the pair remains essentially at three-year lows. The RBNZ’s apparent comfort with this level may serve to slow further falls but global risk appetite will continue to dictate overall direction.