Sentiment showed a marked improvement after Wall Street stood taller on Friday and Germany’s government was reported to be ready to loosen tight fiscal constrictions, setting aside balanced budget rules to stimulate a slowing economy.

Markets had taken fright last week when the US Treasury market seemed to be sending reliable recession signals. However, the news from Berlin has played a part in raising risk appetite. Sure enough those US yields are higher across the board. It must be noted however that this apparent German change of heart comes very late in the cycle and that the German economy has already chalked up one quarter of contraction

Chinese tech giant Tencent saw strong gains as analysts have kept faith in its prospects despite a recent revenue disappointment. Australia’s big-four banks started the week on a strong note, as did Lendlease Group. Its stock rose despite news of a 41% decline in full year net profit. Poor as this was, it was far better than markets had expected.

On the currency front the Japanese Yen weakened as haven assets lost some of their allure. USDJPY has bounced notably having hit lows not seen since March 2018, with the exception of early January’s spurious ‘flash crash.’ 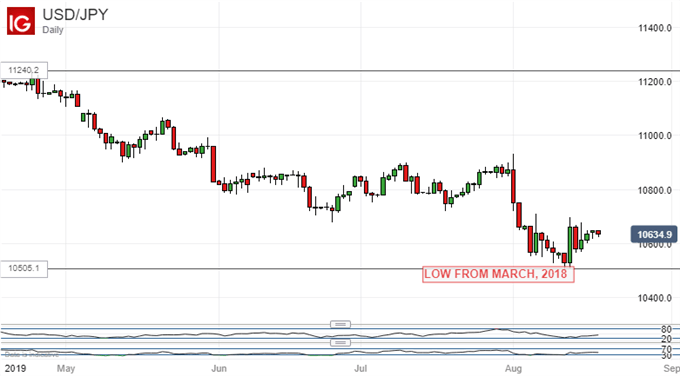 The bulls have managed a reasonable defensive action since but the pair looks to be topping out around early-August’s highs and a reteracement of the sharp falls seen since July 31 still seems a very tall order.

Still, more broadly the US Dollar remained close to the two-week highs reached on Friday against a basket of its most widely traded rivals.

This week will see plenty of likely market moving events but the biggest is likely to be the annual symposium held at Jackson Hole, Wyoming under the auspices of the Kansas City Federal Reserve. With overall Fed Chair Jerome Powell leading the usual roster of monetary heavyweights, the week is likely to see quite cautious market action until the last delegate has spoken.