Asia Pacific stock markets endured a predictably subdued Friday, sandwiched as they were between the US Independence Day break and crucial labor market numbers, also from the US, due later in the day.

Still, Wall Street remains close to record peaks as investors anticipate looser monetary policy ahead, from the Federal Reserve and other developed market central banks. On Friday the Nikkei 225 was green, just, in the middle of the Tokyo afternoon, up 0.05%. The ASX 200 did better, rising 0.6%, while the Shanghai Composite was down by 0.1%.

Major currencies lacked new trading impetus as those US payrolls numbers loom. Analysts are looking for 160,000 more non-farm jobs and an unchanged unemployment rate of 3.6% in June. May’s rise of just 75,000 jobs shocked the market with its weakness compared to expectations of around 180,000 or so. That print saw bets rise on lower US interest rates.

Still, the US Dollar made very thin gains against the Japanese Yen through Friday. 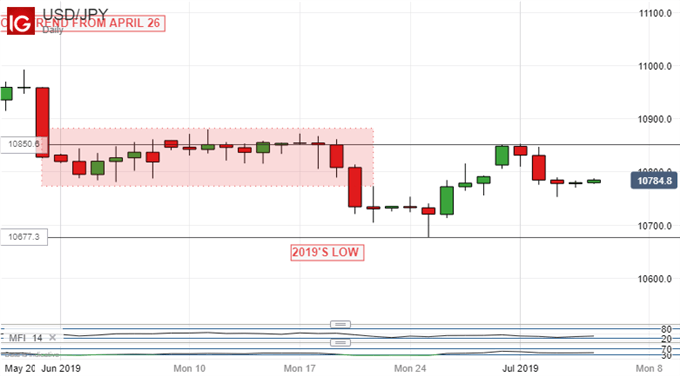 The pair remains capped by last week’s peak in the 108.51 region, which is also where it was stick for some time between late June and mid-July. Crude oil prices slipped a little further in the Asian session as investors worried about world growth prospects and likely demand for energy.