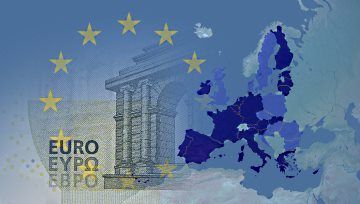 The final Eurozone composite purchasing managers index (PMI) edged ahead to 52.2 in June, better than both the “flash” reading of 52.1 and May’s final 51.8. However, that still suggests minimal economic growth in the bloc.

“The June PMI surveys indicate that the pace of Eurozone economic growth picked up at the end of the second quarter, though it would be wrong to get overly excited by the upturn,” commented Chris Williamson, Chief Business Economist at IHS Markit, which compiles the data.

“The survey is indicative of GDP merely rising by just over 0.2% in the second quarter, and a deterioration of business expectations for the year ahead to one of the lowest seen for over four years suggests the business mood remains sombre. Downside risks to the outlook prevail amid trade war worries, rising geopolitical uncertainty and slowing global economic growth,” he added.

The PMI data in full are shown in the following table from the DailyFX calendar:

Meanwhile Christine Lagarde, who has been nominated for the position of President of the European Central Bank (ECB), will likely continue with the dovish policy stance of current chief Mario Draghi. Subject to approval by the European Parliament, Lagarde will succeed Draghi when his term expires at the end of October.

Lagarde, a French lawyer and politician, is currently Managing Director of the International Monetary Fund and was previously French Finance Minister. She is not an economist or monetary policy expert.

Taken together, Lagarde’s nomination and the PMI data suggest that EURUSD could continue to fall short-term within the upward-sloping channel on the charts. 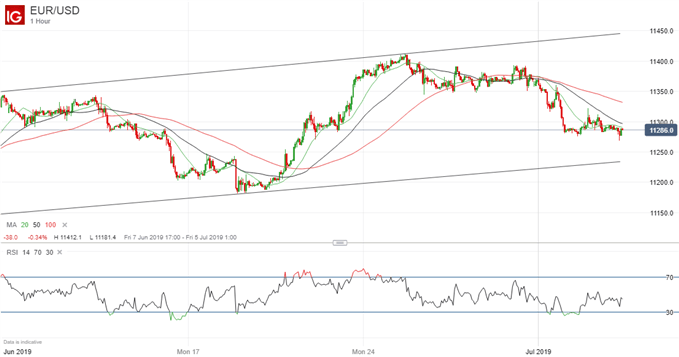 For the Euro outlook longer-term, check out our latest free forecasts for Q3 here

Meanwhile, the prospect of a trade war between the US and the EU over aircraft subsidies could also damage Euro sentiment, although EURUSD is likely to be driven later this week by the US non-farm payrolls data.