The Banco do Brazil will be announcing its decision on what the benchmark Selic rate will be at 21:00 GMT. Since markets are pricing in a hold at the current 6.50 percent rate, volatility will likely ensue if commentary from officials is more dovish than what investors are expecting. Underlying economic activity has continued to lag, leading to greater risks that “symmetric” inflationary pressure may begin to tilt to the downside. 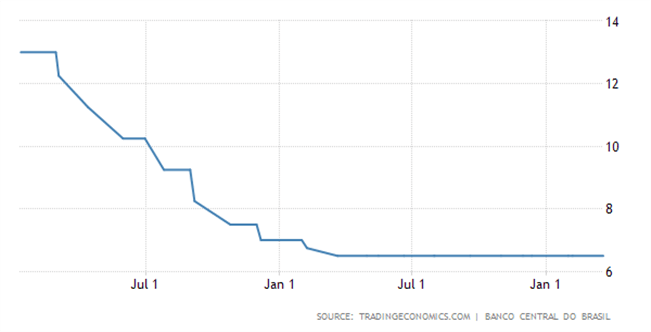 Capital outflow from Brazil has been steadily rising with the net capital account now at its lowest point since February. Global risk aversion from deteriorating US-China trade war fears and deceleration in international economic activity has to led to capital shifting from chasing yields to anti-risk havens like the US Dollar and Treasuries. Investors are also growing increasingly confident that the Fed will cut rates soon.

Credit default swaps (CDS) for Brazilian sovereign bonds have been declining alongside yields, USDBRL, and Fed fund futures. Banco do Brazil is anticipated to show a slightly more dovish pivot as local economic activity continues to show weakness. Under normal circumstances, this would likely push the Real lower and place a higher risk premium on Brazilian sovereign debt and lift CDS spreads because the risk of a default is perceived to be higher. 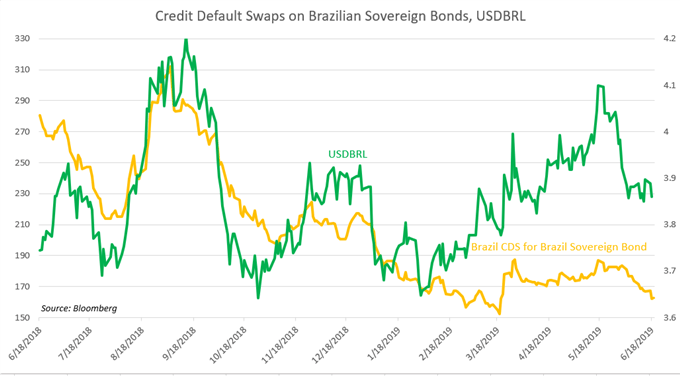 But this is not what is happening. One might surmise then that the culprit is the prospect of cheaper credit from the Fed. If the central bank cuts rates, a weaker US Dollar would remove some pressure on emerging market bonds that have their debt denominated in the Greenback. Naturally, this might deflate CDS rates because the risk of a default is seen as having been reduced, and investors may then be more lax with how they allocate capital.

This could mean that they are less skeptical in diverting capital to more risky assets – such as emerging markets – leading to the prospect of greater capital inflow into developing economies. However, pension reforms will still likely continue to be a source of major uncertainty for those with exposure to Brazilian assets because of the sheer magnitude these reforms have on future economic growth and stability.

A series of votes are expected to happen before a major vote at the end of June. The tail-end of the month also carries with it major implications for the future of global growth and Fed monetary policy. At the G20 summit in Japan, US President Donald Trump and Chinese Secretary General Xi Jinping will have an “extended meeting” in an attempt to reach some kind of trade agreement.

If talks go well, emerging market and risk-on assets will likely rally at the expense of anti-risk currencies like the US Dollar and Japanese Yen. Brazil is attempting to navigate between the US and China without trying to anger either side while simultaneously wrapping up a trade agreement with the EU. If passed, the deal is expected to be the largest reduction in the number of tariffs in the Bloc’s history.