Asia Pacific stocks were always going to face a tough Wednesday following steep declines on Wall Street. These came in turn on the now-usual US-China trade war worries, exacerbated slightly by veiled hint from Beijing that its vast rare earth supplies could come into play, with dire possible consequences for the US tech sector.

Sure enough, all local mainboards were lower. The bellwether Nikkei 225 shed 1.3% with convenience store FamilyMart shares plunging more than 5% as investors worry about an ongoing royalties dispute between it and joint venture partners in China. The Kospi dropped 1.5% with Samsung clearly sharing earlier US woes.

The US Dollar held on to most of its overnight gains against the other majors, with the Euro sagging after last weekend’s European Parliamentary elections. European leaders must now start filling a number of top posts with the identity Mario Draghi’s replacement as President. of the European Central Bank of most interest to markets.

The New Zealand Dollar remained under risk-aversion pressure despite a marginally less gloomy business confidence survey from Australia and New Zealand Bank. Its May snapshot found a balance of -32% of firms gloomy about their prospects. This was the best reading since February and much better than market expectations. Still, weakness here looks entrenched and will remain troubling to policymakers as it has since the balance fell below zero in 2017.

NZD/USD has flirted with the top of its long downward channel but in the current climate a sustained upside break looks unlikely. 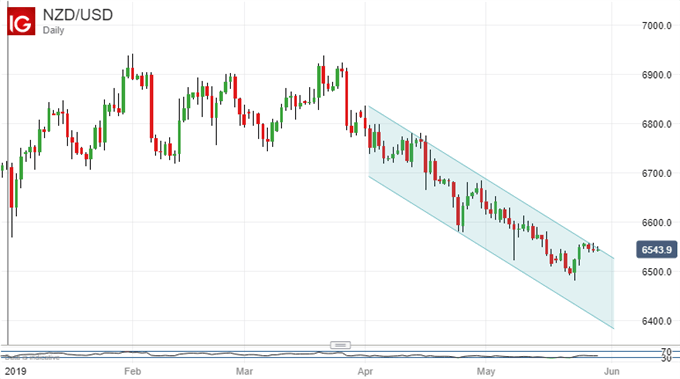 Signs of any trade rapprochement between Washington and Beijing would undoubtedly boost the Kiwi Dollar but, with any such thing seeming ever more unlikely, NZDUSD's path would seem to be leading it lower yet even as the lows of early 2019 have given way.

Bitcoin prices slipped back from the year’s peaks made earlier this week but look extremely well supported close to the highs.