ASX 200 Gains While Most Other Asian Markets Closed, Fed Focus

Asian equity-market action was left largely to Australia on Wednesday, with most other mainboards from China and Japan though Singapore closed for holidays.

The ASX 200 duly rose, however, with the heavily-weighted financial sub-index doing much of the heavy lifting, following on from new record highs made by the S&P 500 in the previous session. The overall index added 0.8%.

US/China trade was also in focus as investors digested more encouraging noises from Washington. White House Chief of Staff Mick Mulvaney said on Tuesday that a resolution is expected within two weeks. Treasury Secretary Steve Mnuchin and Trade Representative Robert Lighthizer are currently in Beijing for talks. Hopes for a deal have kept risk appetite underpinned for much of this year.

Also on market minds of course is the Federal Reserve which will set monetary policy very early on Thursday morning Asia Pacific time. No change is expected to any of the monetary settings but the Fed’s reaction to recent, stronger economic data will be closely parsed.

Foreign exchange markets were predictably short of participants. The US Dollar made small gains on the Japanese Yen, but the New Zealand Dollar was hit, and stayed down, following some decidedly mixed official employment data. The headline jobless rate actually ticked lower but the participation rate weakened sharply.

On its daily chart NZD/USD remains under severe downside pressure as markes move to price in reductions to New Zealand interest rates which are already at record lows. 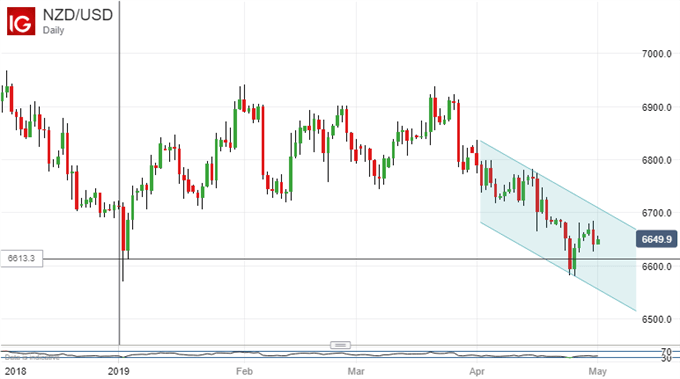 The pair is holding for now, just above the year’s lows, but the strength of the current downtrend suggests that it will be retested, probably quite shortly.

Wednesday’s remaining economic focus will fall mainly on the US. There’s the Fed, of course, but also the April manufacturing, employment and prices-paid snapshot coming up from the Institute for Supply Management. The labor-market roundup from Automated Data Processing is on the slate too, as is the manufacturing Purchasing Managers Index. Canada’s equivalent to the latter is also due. Investors will also get a look at UK consumer credit and mortgage-approval data. Crude oil inventory levels from the Department of Energy will round out the session.