Asia Pacific stocks were mostly higher on Wednesday thanks to some better-than-expected economic readings out of China.

Given all the recent worries about economic slowdown in various parts of the world, and the still-unsettled state of China/US trade there was obviously some relief in the markets that the world’s second-largest economy appears to be at least treading water. That even this may be coming at the cost of increasing already high debt seems to be a worry for another day as far as investors are concerned.

The Nikkei 225 added 0.2% as its close loomed, with Shanghai up by a similar amount. The Hang Seng, ASX 200 and Kospi however failed to hold on in the green and were all down, if not by much.

The Australian Dollar scaled two-month peaks in the aftermath of that Chinese data and held most of those gains through the session. The US Dollar slipped modestly, with the Euro higher as risk-appetite got a fillip.

USD/JPY is heading up towards the top of its recent trading band. 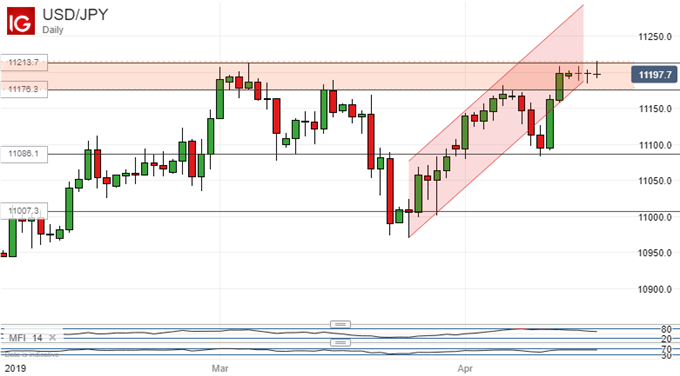 However, recent daily ranges have been quite small, suggesting perhaps that indecision is rising in this market. Support at the range base is close at hand, at 110.86. This could be tested in short order.

Gold prices slipped a little after the Chinese numbers but inched back some ground later. Crude oil prices rose again as the market focused on supply risks exacerbated by rising tension in Libya.

There’s plenty of economic life left in Wednesday’s global session. Official inflation figures are coming up from the UK, Canada and the Eurozone. Trade balance data are also due from the US, along with wholesale and crude oil inventory numbers. Central bank watchers can look to the Bank of England’s Mark Carney and the Bank of France’s Francois Villeroy de Gallhau. Both are scheduled to speak in Paris.