The Australian Dollar rose on Wednesday after the release of official Chinese growth data which managed to creep ahead of forecasts.

Gross Domestic Product expanded by 6.4% in the year’s first quarter compared to the same period in 2019. This matched the previous quarter’s performance and was a tick better than the 6.3% expected. Growth was 1.4% on the quarter, in line with expectations.

The Australian Dollar often acts as the currency markets’ favorite liquid China proxy. This is understandable enough given Australia’s vast raw material export links to the world’s second-largest economy. It seems to have done so in this case, rising despite the scant expectation beat. It seems likely here that there were worries in the market about a weaker figure given current focus on trade between China and the US, where a deal remains elusive. 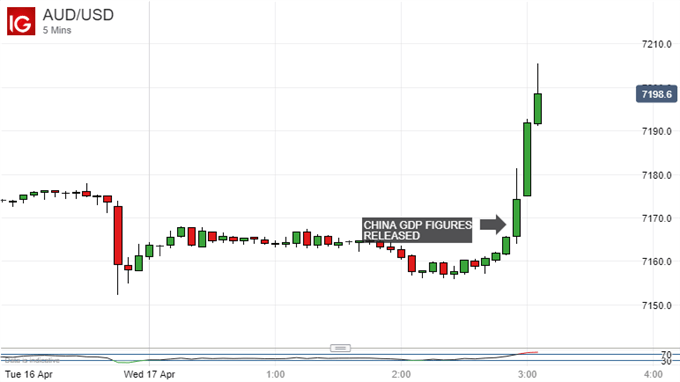 Other strong Chinese numbers were released simultaneously. Industrial production rose 8.5% on the year in March, much better than the 5.9% rise expected. Retail sales added 8.7%, topping the 8.4% consensus. Overall these numbers suggest that the Chinese economy is certainly still firing, if not on all cylinders. This is despite its trade standoff with the US and signs of slowdown in other parts of the world notably Europe.

Still, concerns will remain that growth is being bought at the cost of high debt accumulation.

On its daily chart, meanwhile, AUD/USD remains just above the downtrend channel which contained trade for much of 2018 as US base rates rose consistently while Australia’s remained at the 1.50% record low which has endured since August 2016. 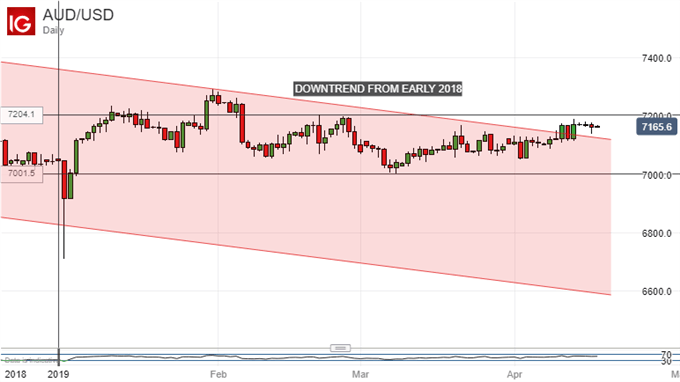 A more cautious Federal Reserve and resilient risk appetite got the Aussie out of jail but the currency still utterly lacks likely interest rate support of its own. This was underlined earlier this week by minutes from the last Reserve Bank of Australia monetary policy meeting. They showed a broad admission that a rate rise was unlikely, with rate setters much more focused on the likely consequences of a cut.

AUD/USD is still likely to benefit from any upswings in risk appetite, with any durable US/China trade settlement apt to see it fly, at least initially. However ,the prospect of still-lower Australian interest rates will likely continue to weigh the currency down.

The RBA has placed special focus on the labor market. Strength here has been a clear bright spot for the domestic economy, but suspicions seem to be growing that a turn could be coming. This will make the official labor market release even more crucial for Australian Dollar traders. The next installment is due on Thursday.