The US Dollar pared losses immediately after the Federal Reserve released its March FOMC meeting minutes. The move higher is likely in response to the mixed opinions among Fed officials which counters market expectations for an overwhelmingly dovish publication. 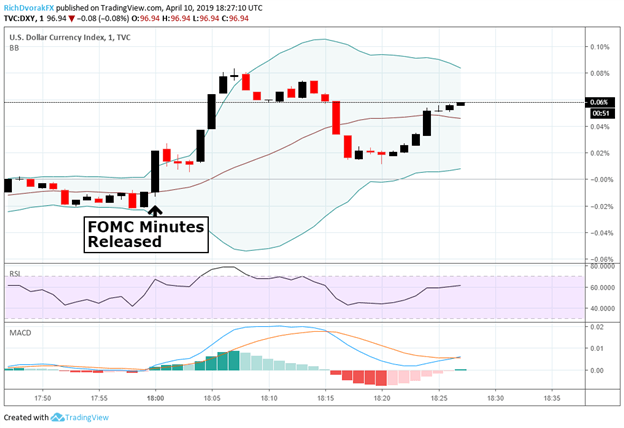 A majority of FOMC participants voiced a belief that the progression of economic outlook and risks would likely result in leaving the Fed’s policy interest rate unchanged for the rest of 2019. That said, some participants countered that the Fed should raise rates modestly later this year if the economy evolves as currently expected with economic growth running above its long-term trend. Accordingly, the central bank’s ‘patient, wait-and-see’ approach to conducting monetary policy was echoed in the FOMC minutes.

The minutes also discussed the details behind the Fed’s latest revisions to its economic projections and plans regarding its balance sheet normalization. One area of potential concern highlighted was bleak consumer spending and relatively mediocre performance of the US labor market since its January meeting. Although, participants agreed that “the labor market had remained strong but growth of economic activity had slowed from its solid rate.”

Also noted was expectation for GDP growth to rebound ‘solidly’ in the second quarter after a transitory slowdown at the start of the year. That being said, the FOMC reiterated its view that the most probable scenario over the foreseeable future is one of sustained expansion, strong labor market conditions, and inflation in-line roughly around the Fed’s 2 percent target. 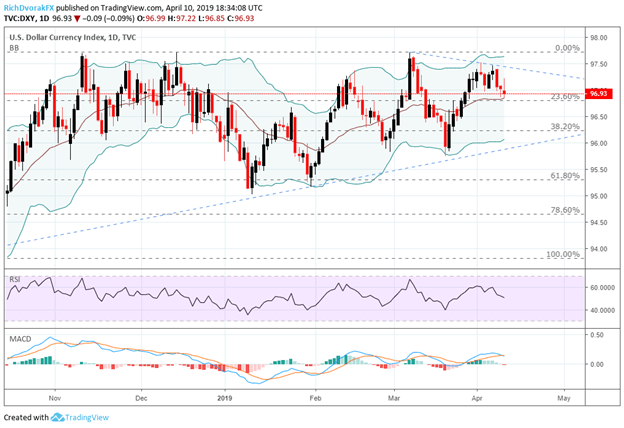 Recent commentary from Treasury Secretary Stephen Mnuchin could also be contributing to US Dollar price action. Mnuchin stated that his meeting with Chinese Vice Premier Liu He yesterday was “very productive,” adding that negotiators have “pretty much agreed on an enforcement mechanism.” Likewise, Euro performance in response to the ECB’s latest meeting also could also be weighing on the USD today.