US Secretary of State Mike Pompeo said on Monday that he thought Washington and Beijing were ‘on the cusp’ of reaching an accommodation, the latest tantalizing hint that a tangible step forward, at least, will be forthcoming.

Economic news released through the session was less encouraging. Australia’s Gross Domestic Product came in below expectations for the final quarter of the old year. Its 2.3% annualized rate was the weakest since early 2017 and well below the 2.6% rise expected. Meanwhile China’s service sector was revealed by a private survey to have expanded at its slowest rate for four months in February.

In the foreign exchange space, the Australian Dollar sunk to two-month lows. This was thanks in part to that weak growth data but also because Reserve Bank of Australia Governor Philip Lowe struck a dovish note in a Sydney speech. Mr Lowe said it was hard to see Australian interest rates rising this year (the markets continue to price-in a cut), and that growth in the second half was likely to be below trend. 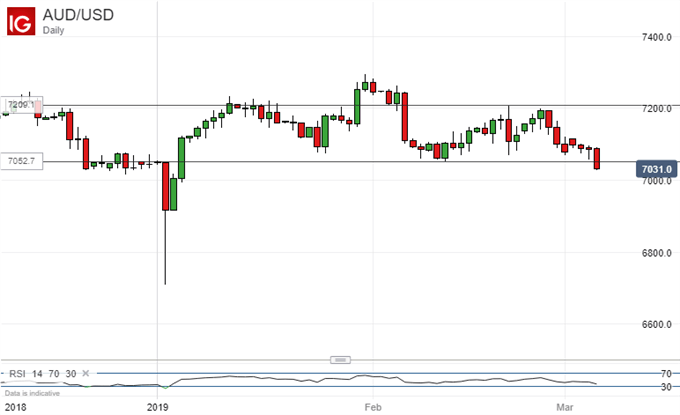 Many banks seem to be strengthening their rate-cut forecasts, or revising them to bring the timing forward, and this also weighed on the currency.

Crude oil prices stayed down, despite some usually-supportive trade optimism, as news of rising US supply and inventories weighed. Gold prices were steady just above five-week lows through the Asian session.

Still to come on Wednesday’s data slate is the Bank of Canada’s monetary policy decision (no interest-rate change expected), Germany’s Purchasing Managers Index for the construction sector and the economic outlook from the Organization for Economic Cooperation and Development. From the US will come mortgage-application figures, December’s trade balance and more news of crude oil inventory levels.