Join DailyFX analysts for live coverage of all major market-moving data at the DailyFX Webinars.

The Japanese Yen gained late in Wednesday’s Asia session, with US stock futures lower as tensions between India and Pakistan in the disputed territory usually known as Kashmir reportedly spilled over again into military action.

News agencies report that Pakistan has shot down two Indian Air Force jets and has arrested one of the pilots. Pakistan reports that it struck the targets from their own airspace, on the Pakistani side of the Line Of Control (LOC) which splits the territory between the two countries.

Indian aircraft struck what its government said were terrorist encampments on Tuesday, in what it also said were retaliatory attacks for a terrorist strike in Pulwana, on the Indian side of the LOC on February 14. It left dozens of Indian police personnel dead. New Delhi accused Islamabad of harboring the Jaish-e-Mohammed miltiant group which claimed responsibility.

The Indian bombing runs were the first time since 1971 that its jets have ventured into Pakistani airspace. There have also been reports of artillery exchanges between the two countries at the LOC.

Market reaction so far has been modest but clear. The haven Yen caught a bid, US stock futures headed South and some shine was taken off an Asia Pacific equity trading session which had been quite bullish all around. 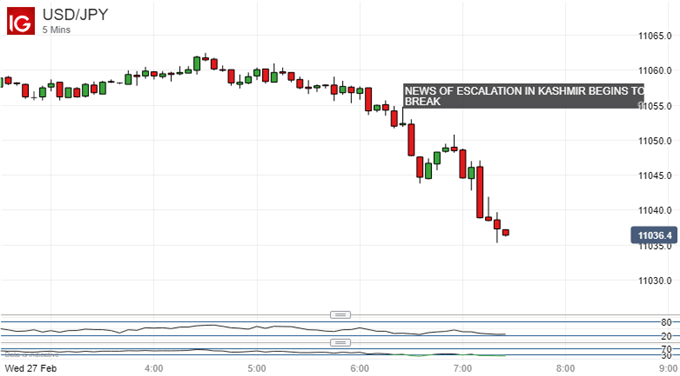 US President Donald Trump will meet North Korean leader in Hanoi later, but this escalation threatens to overshadow those talks. Markets will remain vulnerable to headlines from India and Pakistan