China’s official manufacturing Purchasing Managers Index for January came in at 49.5. That was just above both the 49.3 print expected and December’s 49.4. In the logic of PMIs any reading below 50 signifies contraction for the sector in question. China’s manufacturers chalked up their first such reading since 2016 in December, and, worryingly, the trend has continued into another month even if it hasn’t worsened.

This series arguably more than any other underlines the urgency with which China’s economy needs an end to its trade disputes with the US, as the uncertainties created are clearly now weighing heavily.

Still, AUD/USD had already had a leg up on Thursday thanks to the general US Dollar weakness engendered by perceived caution on interest rates from the US Federal Reserve. 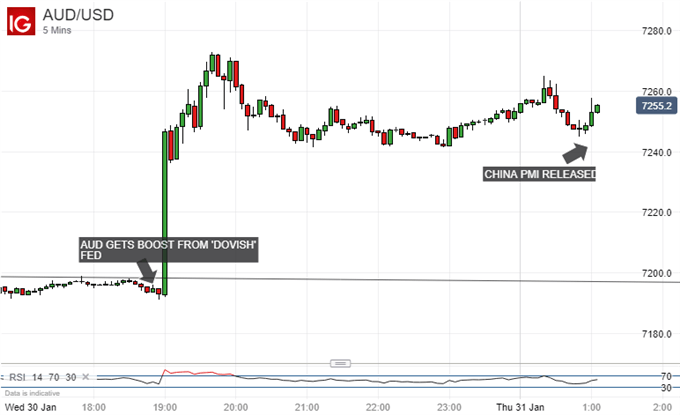 China’s very modest data beat and the fact that the sector remains under clear pressure didn’t have much impact by comparison, but the pair did rise a little

The composite PMI blends outcomes from both manufacturing and service production. It came in at a perkier 53.2 from December’s 52.6. China’s service sector continues to thrive. Its PMI rose to 54.7 from 53.8.

On its broader daily chart, AUD/USD remains above the broad downtrend channel which bounded much of 2018’s trade as US intertest rates rose. Meanwhile Australia’s remained stuck at the 1.50% record low they’ve loitered at since August 2016.

The Aussie has been boosted against the greenback this year, as have other currencies, by a general rethink about the likelihood of further interest rate rises Stateside. This process was accelerated into Thursday’s trade. 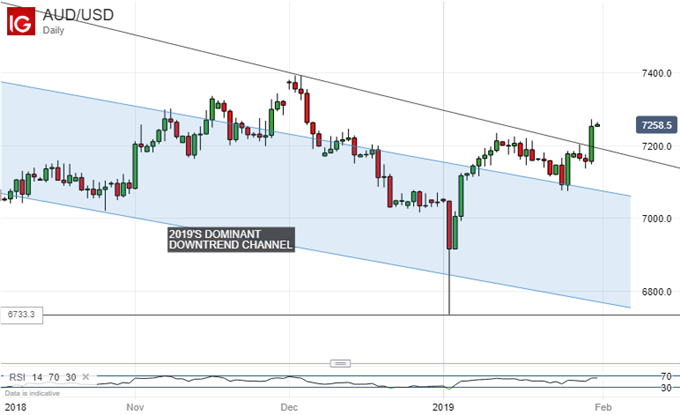 However, Australian inflation remains doggedly below target and domestic rate futures markets still price in further rate cuts this year even though the Reserve Bank of Australia still insists that the next move it makes is more likely to be a rise. The markets may come back around to this view, particularly if China and the US manage to ink a durable trade settlement -Australia has plenty of interest in this.

For the moment though the complete absence of interest rate support is likely to weigh on the Aussie once market focus moves away from the Fed and back to domestic prospects.