The Australian Dollar wilted Tuesday on a very gloomy assessment of current conditions from Australian businesses.

Overall business confidence remained stable in December according to the National Australia Bank’s venerable survey, albeit at very low levels. The index reading of 3 matched November’s print but that was the lowest since January 2016. What really did the damage to AUD/USD, however was that current conditions assessment.

Its reading plunged to just 2, from 11 in November.

Business confidence had been holding up pretty well until the end of last year, but is now running at just half of the survey’s long term average of 6.

Australian business remains very vulnerable to the clear slowdown visible in much Chinese data, given China’s importance to Australia’s raw material export machine. Indeed Australian businesses will be hoping as hard as any that this week’s high level bilateral trade talks between Beijing and Washington will bear some tangible fruit.

Market watchers seem to think that a durable deal remains some way off, even assuming that it is possible. Given that, success is likely to be measured in willingness to pursue further talks and, perhaps, an end to the tit-for-tat tariff raising which made markets so volatile last year.

AUD/USD was clearly hit by the NAB survey and dropped about 30 ticks in short order after its release. 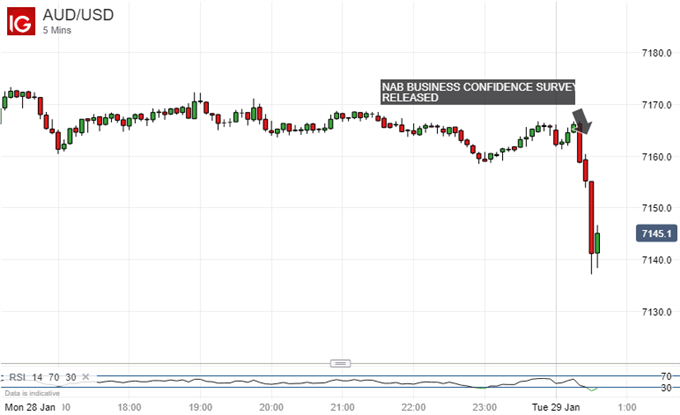 On its broader, daily chart AUD/USD remains above the downtrend channel which dominated trade for much of 2018, as US interest rates rose and Australia’s remained doggedly at their record low of 1.50%

The Aussie has bounced into 2019 as investors rethink the likely magnitude of US rate rises ahead and as hopes for a trade breakthrough buoy growth-linked assets like the Aussie. 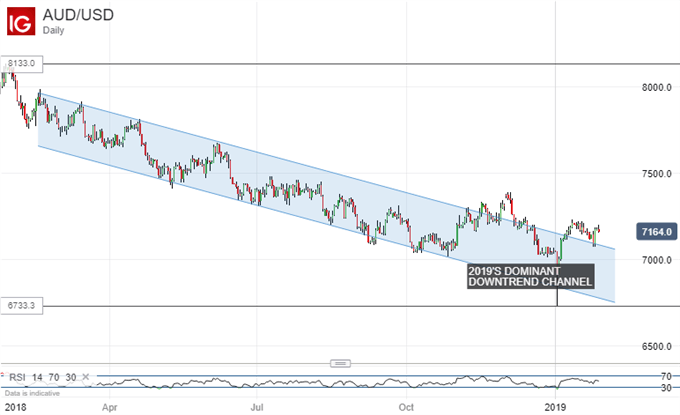 It could continue to gain this week if the US Federal Reserve strikes a more dovish tone when it sets monetary policy on Wednesday.

However, Australian rate futures markets now strongly suggest that the next move in Australian interest rates may yet be a fall, even though the Reserve Bank of Australia still insists that a rise is more likely. A near-term steer on who is likely to be right here (and they can’t both be), may come from Wednesday’s Australian inflation data. More weakness is expected with an annualized rise of just 1.7% predicted. If that is seen then the markets are likely to remain convinced that lower rates remain a distinct possibility.

For as long as the Australian Dollar completely lacks interest rate support, it is likely to remain vulnerable. It’s notable that recent AUD/USD strength has not taken the pair past its recent significant high (early December’s 0.7393).