A lack of any overt bad news on Chinese/US trade relations seems to have been taken as good news. The two sides do at least appear to be stepping back from any tariff war escalation and the negotiation process is ongoing.

Federal Reserve Chair Jerome Powell declared himself very worried about US debt levels, but he did call this a long-term problem and so by inference not one which current policy settings are meant to explicitly address.

Asian economic numbers were mixed, with Japanese household spending down more than expected in November but Australian retail sales slightly beating forecasts for the same month.

The Nikkei 225 had added 1% in the middle of the Tokyo afternoon, with most other major indexes in the green, albeit by a little less. The ASX 200 bucked the trend, with some cash clearly taken off its table after a four-day winning streak.

Still, the Sydney stock benchmark is looking quite strong. It is well above the dominant downtrend line from 2018 and has established a steep new uptrend channel. 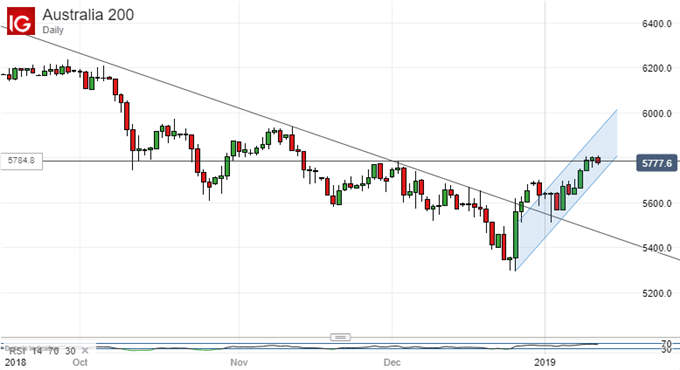 Some consolidation will probably be in order shortly, but if that takes place around the previous significant peak- December 7’s 5840- then bulls will probably still have cause to remain hopeful.

Mr. Powell also reiterated Thursday that the Fed could afford to be patient with monetary policy, a comment which put the US Dollar on the defensive.

The remaining economic highlight of Friday will be the official US Consumer Price Index for December. DailyFX Senior Currency Strategist Ilya Spivak suspects that these data could make the going tough for both gold and crude oil prices.

The former gained a little through the Asian session as the greenback remained under pressure. Meanwhile oil retraced a little but still looks set for a weekly rise, thanks to those hopes for trade rapprochement.

There’s a plethora of numbers out of the UK, from manufacturing and industrial production through to trade figures. However unless these vary widely from forecast expectations they are likely to be lost on Sterling traders amid all the Brexit hubbub.