Most Asia Pacific stock markets gained again on Wednesday, with investors still reportedly hopeful that this week’s scheduled meeting between Donald Trump and Xi Jinping can produce at least a thaw in deep-frozen trade relations between the two global titans.

The pair will get together at the summit meeting of leaders from the Group of 20 leading industrial economies kicking off in Argentina Friday.

Wall Street gained overnight after US National Economic Council Director Larry Kudlow alluded to plentiful communication between Washington and the Chinese government, ‘at all levels.’ Kudlow also told reporters that the President thinks there’s a good possibility that agreement can be reached.

The Nikkei 225 had duly added 0.7% by the middle of the Tokyo afternoon. Shanghai was up by a similar amount, as was the Hang Seng in Hong Kong. The Kospi tacked on 0.3%, with the ASX 200 just about flat. The Australian blue-chip benchmark continues to meander upward on its daily chart but, at present, doesn’t seem to have the sort of resolve which will probably be required if resistance no formed by the sharp falls of November 11 and 13 is to be conquered. 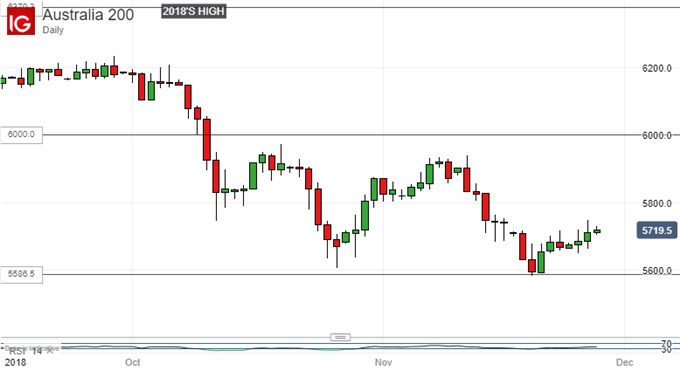 Foreign exchange markets appear a little less sanguine about the chances of a trade deal than do their equity-focused brethren. The US Dollar still appears to be benefitting from a substantial haven bid, albeit one assisted by hopes for further interest rate rises after a speech from Federal Reserve Chair Jerome Powell. The UK Pound was beset by further Brexit-related worries. It still looks extremely unlikely that the proposed deal will pass the British Parliament, with what happens should it not still clouded.

Crude oil prices rose cautiously as that market looked forward not only the G20 meet but also to OPEC’s upcoming conclave. Gold prices were steady, making little progress as those Fed comments boosted the Dollar.

There are plenty of economic data still to come on Wednesday. Investors will get a look at official US trade numbers and revised Gross Domestic Product figures for the third quarter along with mortgage application levels. Annualized growth is expected to remain 3.5%. Germany’s GfK consumer confidence snapshot it on the way too, as is the Bank of England’s Financial Stability Report.