US crude futures endured their worst one-day loss in more than three years on Tuesday, falling by around 7% in spite of Saudi Arabian pledges to reduce supply this year. Markets are clearly still worried that the market will remain oversupplied even with this cut. Chinese shares had been down for much of the day but the Shanghai Composite was flat in the middle of its afternoon session, with the Hang Seng down 0.4%. Australia’s ASX 200 had shed 1.7%, with the Kospi off by 0.2%. The Nikkei 225 stood out in the green, if not very far, rising 0.1%.

However the Tokyo benchmark remains below its most recently dominant uptrend line and, while it does, the lows of late October look more likely to be seen again than this year’s peak, made earlier last month. 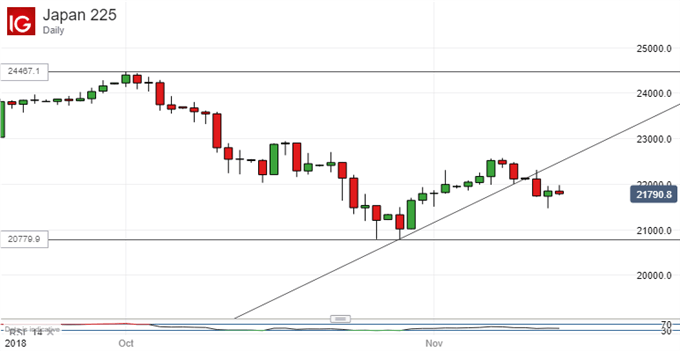 The day’s regional data came mainly from China where October retail sales underwhelmed market expectations while industrial production topped them by a whisker. Beijing’s historically modest 6.5% growth target still looks eminently achievable but much of course hangs on the outcome of trade talks with the US. Theiur outcome remains in doubt.

In the foreign exchange space, the Euro and Sterling recovered a little as markets looked hopefully to the chance of a Brexit deal. There seems small chance that any so-far trailed agreement will get through the UK Parliament, however, so both currencies could still face a bumpy ride ahead. For the moment their gains saw the US Dollar retreat a little from its recent 16-month peaks. That said the greenback retains a solid underpinning based on the Federal Reserve’s position as clearly the most aggressive tightener of monetary policy.

Gold prices edged up as the Dollar retraced while crude oil prices continued to fall,

There is plenty of important economic data still to come on Wednesday, including official inflation figures from both the US and the UK. German Gross Domestic Product numbers are on tap too, along with the Eurozone’s own growth stats. US weekly and hourly earnings will be in focus as well.