The US Dollar was on pace to deliver another solid day of gains as market mood deteriorated during APAC trade, fueling haven demand for the world’s reserve currency. This then turned around later in the day amidst reports that Germany and the UK dropped a key Brexit demand, potentially paving a smoother path for Britain to strike with the European Union on an exit deal.

As a result, GBP/USD soared as much as 1.2% as the British Pound appreciated against its major counterparts. UK government bond yields rose, signaling firming BoE rate hike bets. This weighed against the US Dollar and earlier gains were pared. EUR/USD ended up posting its largest gain on the daily chart since August 27th.

Following the market moving Brexit news, the BoC brought volatility to the Canadian Dollar and it could have gone better. The central bank left rates unchanged at 1.50% as expected, but failed to dial up expectations of a hike in October. USD/CAD rose, but finished the day little changed. With that in mind, it would probably take better-than-expected Canadian economic data ahead to revive hawkish bets.

Despite the Brexit update, sentiment continued deteriorating after Wall Street came online. The S&P 500 and NASDAQ Composite declined, falling 0.28% and 1.19% respectively. This was led by weakness in information technology as US Senators increased prospects of regulating social media. Despite this, the anti-risk Japanese Yen ended the day weaker. Gains were offset by USD performance.

Ahead, prolonged weakness in shares could see Asia Pacific trade echo the performance on Wall Street. This may lead the US Dollar higher as markets are still facing the potential of rising trade wars between the world’s largest economies. Meanwhile, the Australian Dollar faces a trade balance report. Yesterday’s stronger second quarter GDP report could offer a data beat. But gains on that may not last given that the RBA still does not intend on raising rates in the near-term.

Even though EUR/USD rose Wednesday, the pair was unable to push out of channel resistance. In fact, the pair stopped right on the 23.6% Fibonacci retracement. Given the prospects of USD gains ahead, the Euro may find its next leg lower after this temporary pullback. This would resume its decline since late August after a descent through a near-term rising trend line. Immediate support is the 38.2% level at 1.1568. 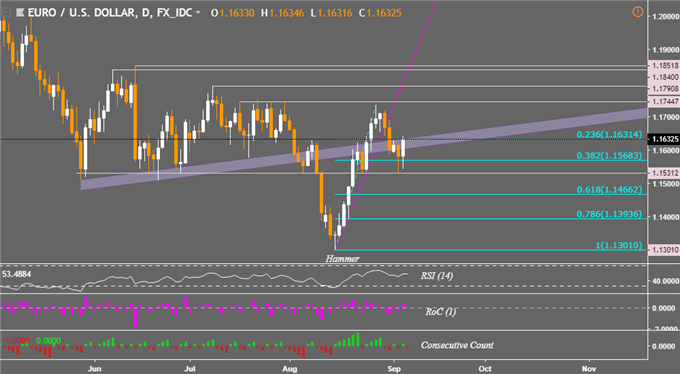