After yesterday’s impressive performance, the Canadian Dollar pared its gains on Wednesday. The commodity currency came under pressure as the risk-off tone seen in Asia/Pacific trade echoed into European and US trade. This seemed to be fueled by investors’ concerns as Turkey applied tariffs on US imports, potentially risking increased political tensions with President Donald Trump.

Sentiment-sensitive crude oil prices also faced selling pressure as Wall Street came online and the S&P 500 gapped almost 0.50% lower. The commodity was then further hindered by official EIA estimates of crude stockpiles. Those unexpectedly increased by 6.8m barrels which was the largest gain since March 2017, countering preliminary API expectations which called for a 2.8m contraction.

In addition to falling oil prices, the Canadian Dollar was also weighed by declining local government bond yields. However, USD/CAD halted its ascent and consolidated shortly after Wall Street open. There, the MSCI Emerging Markets ETF (EEM) rallied and too helped other global stock indexes bottom. This closely aligned with an announcement from Qatar which pledged $15b in direct investment into Turkey.

Still, by the time Qatar stepped up to help Turkey’s financial situation, the damage had already been done to stocks. Perennially anti-risk currencies like the Japanese Yen and Swiss Franc were amongst the best performers on Wednesday. There was a rebound in the Australian and New Zealand Dollars towards the end of the day as well, which ended up little changed against the US Dollar.

Ahead, the Australian Dollar awaits a local jobs report. Data out of the country has been tending to outperform relative to economists’ expectations as of late, opening the door to an upside surprise. While this may offer some immediate Australian Dollar gains, a lasting response seems unlikely given its potentially limited implications for RBA monetary policy expectations.

Join our Australian Jobs Report Webinar for live coverage of the event and its impact on AUD/USD and other Aussie crosses!

While it may be tempting to argue that Asia/Pacific shares could turn lower, echoing weakness in the S&P 500 and NASDAQ Composite. Keep in mind that local stocks already reacted negatively on Wednesday to increased Turkish financial worries. In fact, the rise in the EEM amidst the news from Qatar could offer consolidation instead for the Nikkei 225 and ASX 200.

Looking at the technical picture in AUD/USD adds another argument that prices may turn higher in the near-term. A hammerbullish reversal pattern has formed after the pair was unable to push under the 78.6% Fibonacci extension at 0.7195. For this formation to fully translate into a turn higher will require confirmation via more closes to the upside. In the meantime, it presents as an early warning signal. 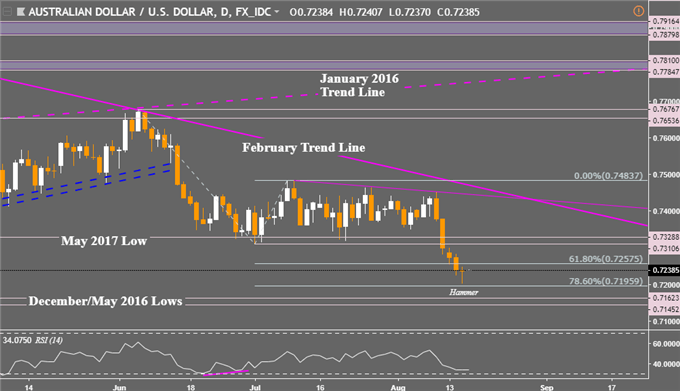 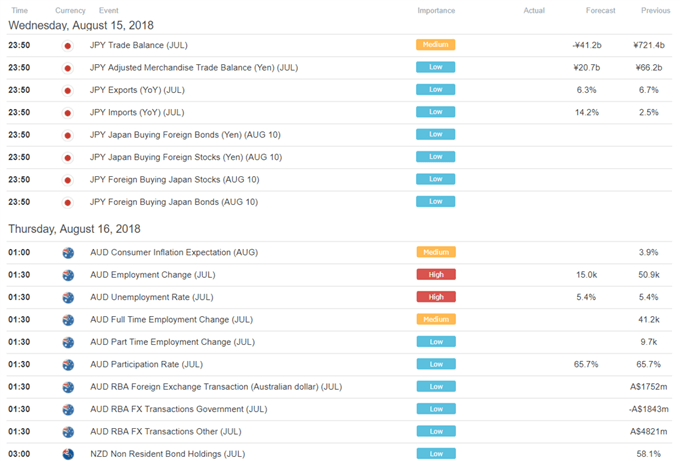