Check out our Third Quarter Forecasts for Currencies, Commodities and Equities to Enhance Your Trading Opportunities!

The threat of a burgeoning trade war between the United States and European Union seems to have diminished Wednesday. US President Donald Trump met with European Commission President Jean-Claude Juncker to talk trade in Washington DC and the meeting seems to have resulted in concessions from the bloc and relief from relentless US pressure. The announcement initially sent the euro higher versus the dollar and US equities rallied in afternoon trading with the initial leaks of progress. The deal comes as a surprise, contrasting reports from earlier in the day suggesting Juncker had no intention of securing a deal at the meeting.

Meeting in the Rose Garden of the White House, the two officials relayed their discussion to the press, confirming earlier leaked reports suggesting headway was being made. According to the proposed terms, the European Union will lower industrial tariffs, look to increase soybean and liquefied natural gas imports from the US, and the vague commitment to begin dialogue on reducing tariffs and “slashing costs dramatically.”

President Trump expressed the importance of a strong relationship between the trading partners and went on to say the US and the EU will work together to reform the WTO. The pair will also work to resolve the steel and aluminum tariffs facing the EU – though they currently remain in place – and want to move towards “zero tariffs” on non-auto industrial goods. The timeline for the concessions is not immediately clear, but Mr. Juncker said the counterparts will “resist further tariffs as long as talks are ongoing”. This is perhaps the EU’s biggest take away from this meeting, but it is clear that negotiations to a truly satisfying outcome from both sides will take some time.

5. What is the Trump Administration's Strategy in its China Trade War? - By John Kicklighter, Chief Currency Strategist

The impact on equities and the relevant currencies was notable. The EUR/USD pair jumped on reports of the concessions and maintained buoyancy through the conference. Eventually, the pair rested near 1.1735 after climbing from 1.6750 before the news. Despite Wednesday’s rally, the pair remains down nearly 2.35% for the year. 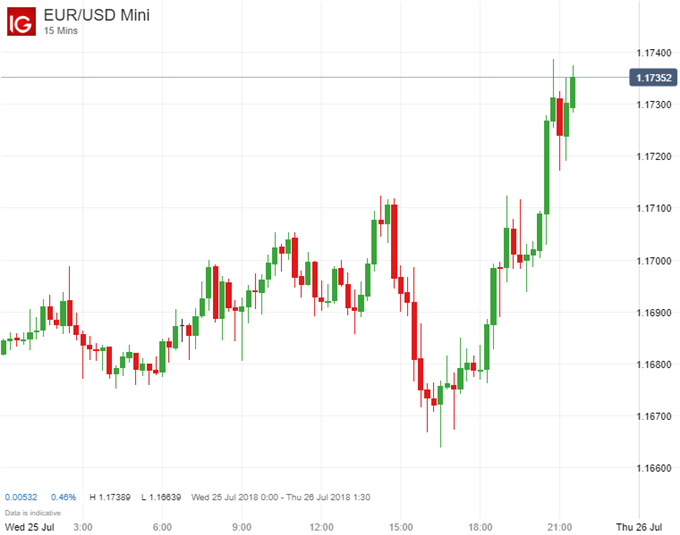 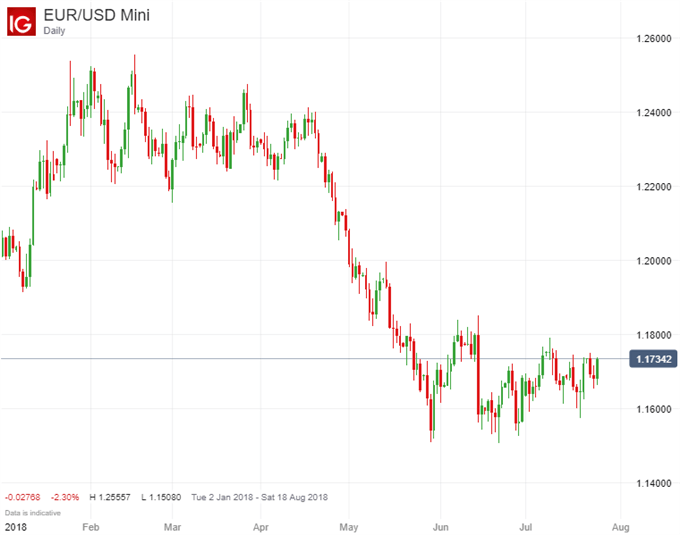 Similarly, US equities spiked in the final minutes of trading with the S&P 500 climbing nearly 1% before negative earnings weighed on the index. The NASDAQ and Dow Jones Industrial Average also saw similar performances, climbing on the news and eventually falling on negative earnings from companies like Facebook and Ford. 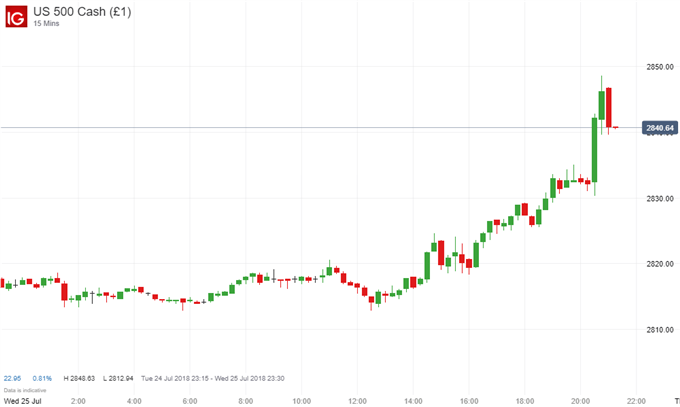 To stay up to date on important events that could move markets, consult our Economic Calendar.