As anticipated, the lowest unemployment rate since 1992 did little to offer bullish momentum to the Japanese Yen. In May, Japan’s jobless rate further contracted to 2.2 percent unexpectedly. Economists were anticipating a hold of 2.5%. The job-to-applicant ratio also beat estimates coming in at 1.60 versus 1.59 while the labor force participation rate remained unchanged at 61.7%.

Not too long ago, Japan’s Finance Minister highlighted that there was a labor shortage in the country. As such, you would expect prices to rise in the country as employers outbid each other for the few remaining prospective candidates. But significant wage growth has been absent and the country is notoriously known for its lack of inflation.

As such, it is not too surprising to see such minimal reaction from the Japanese Yen as this data has very limited implications for changing Bank of Japan monetary policy prospects. The central bank is showing no signs of halting its quantitative easing programme as it downgraded its assessment of inflation at their most recent rate announcement.

With that in mind, the anti-risk Japanese Yen has been more interested in risk trends lately. Looking at the immediate chart below, you can see the unit depreciating against the US Dollar as Nikkei 225 futures rose during the US trading session. As such, updates from the two largest economies on trade developments are likely to influence sentiment in the near-term, thus impacting the perennially haven Yen. 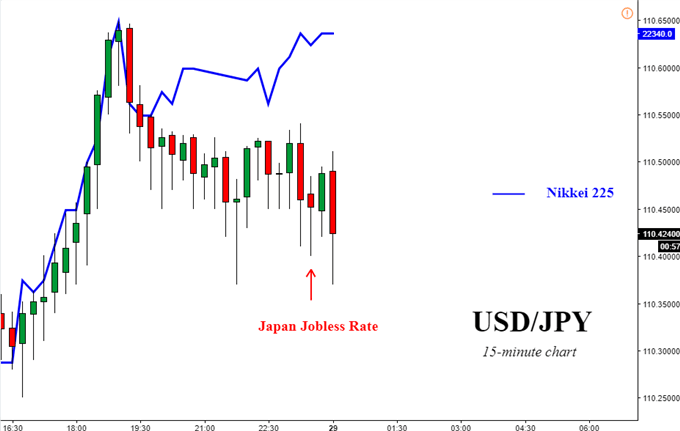 USD/JPY Technical Analysis: On the Edge of Uptrend Resumption?

On a daily chart, USD/JPY has still been struggling to make progress above the long-term descending trend line from 2017. Nevertheless, a break above it opens the door for resuming its uptrend since April. However, it will then have to climb above the highs set earlier this month around 110.84. A push above that exposes the May high at 111.39. On the other hand, immediate support is the 23.6% Fibonacci retracement at 109.72. 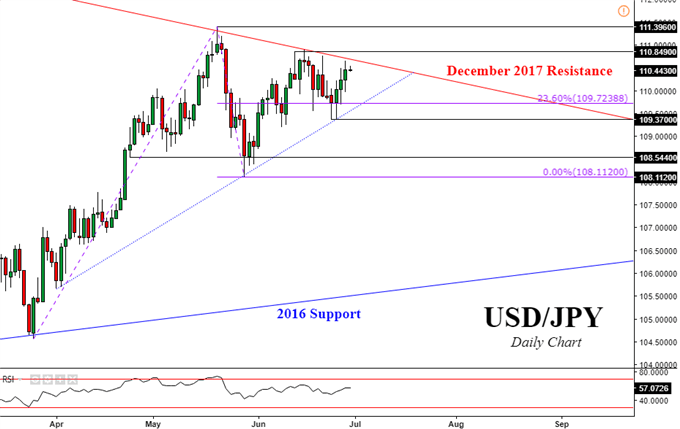