At a glance, Asian stocks were mostly lower by Tuesday afternoon trade, echoing losses from the prior European and US trading sessions. There, the world’s largest economy mulled limiting foreign investment into tech firms which unnerved traders from around the world. An update from Trade Adviser Peter Navarro appeared to have helped the S&P 500 bottom as he tried easing some of those concerns.

Looking at certain Asian shares closer reveals a slightly different story. In fact, most of them gapped lower and then spent the rest of the time consolidating. This may have been due to a lack of immediate updates as traders await the US Treasury release on those planned restrictions in technology investment towards the end of the week.

In fact, the Nikkei 225 gapped lower and actually rose throughout the session, appearing close the gap at the time of this report as expected. Unlike Japan though, Australia’s ASX 200 was still down about 0.22% after gapping lower and South Korea’s KOSPI was about 0.49% in the red. Chinese shares on the other hand were more aggressively lower with the Shanghai Composite down about 0.82%.

Combining the gaps in Asian shares to the downside with consolidation afterwards, volatility in the FX spectrum appeared to have been restrained to a certain extent. The typical reaction was there, anti-risk currencies like the Japanese Yen and even the Swiss Franc were higher. Meanwhile, the sentiment-linked Australian and New Zealand Dollars fell. But these moves largely lacked conviction.

Ahead, aside from the persistent risk of trade war threats escalating, we will get US consumer confidence. Last week, local business outlook fell to its lowest outcome since November 2016 and which helped put a dent in the US Dollar. Even so, US economic data has still been tending to outperform relative to consensus. This opens the door for the consumer side of the equation to perhaps revive some optimism and thus perhaps pushing USD higher.

On a daily chart, the USD/JPY appears to be heading lower after failing to push above the December 2017 descending resistance line. This occurred as negative RSI divergence signaled that momentum to the upside was ebbing. From here, immediate support is the 14.6% minor Fibonacci extension at 109.10 followed by the May 29th low at 108.11. 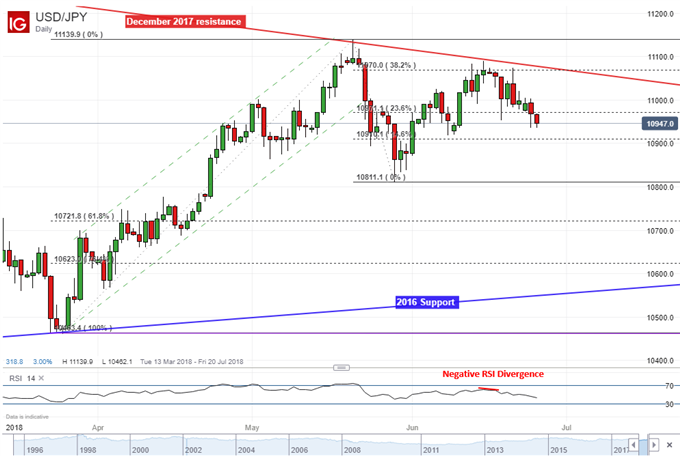