The Japanese Yen rose against the US Dollar on Monday despite news of a much wider than expected trade deficit in its home country.

May’s trade balance came in at –JPY578.3 billion (-US$5.2 billion), well below the JPY202.5 billion gap expected. Still, within those numbers, exports rose at their fastest annual rate for four months, 8.10%. However imports ran well ahead of them, rising by 14% on the year when only at 8.2% rise had been expected.

The data appeared to give the Japanese Yen a lift as investors digested them. Given the current trade spat between the US and its major partners, notably China, it’s possible that the markets are more-than-usually prepared to cheer hard evidence that world trade can be resilient. 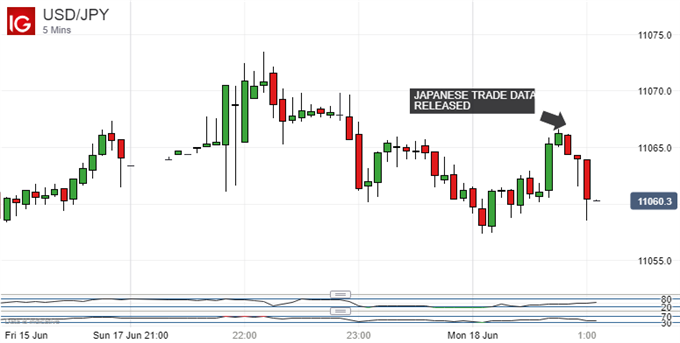 Still, USD/JPY remains in the broad and gradual uptrend which has been in place since late March. This makes quit a bit of sense as Interest rate differentials clearly favor the US currency. The Federal Reserve has just raised rates and is expected to do so again this year, perhaps twice. The Bank of Japan meanwhile remains in full stimulus mode, with negative rates, quantitative easing and yield-curve control all-too evident.

There was some hope earlier this year that Japanese consumer price inflation was at least headed higher and that it would shortly reach the 2% point at which stimulus could presumabnly be withdrawn,

However prices have softened considerably since and any monetary tightening seems as distant a prospect as ever. 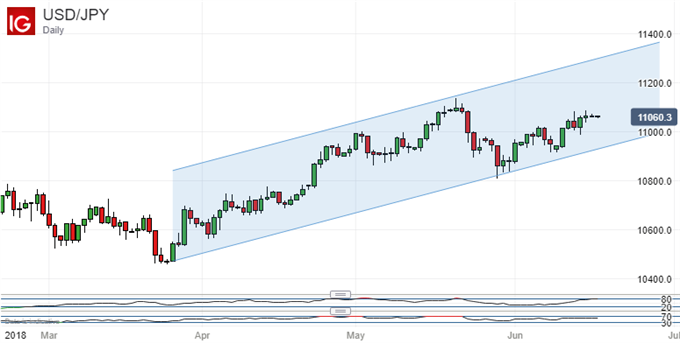 It is perhaps notable that the pair is now trading more closely to the bottom of its range. Those rising trade tensions between the US and China seem to have reduced risk appetite somewhat. The Japanese Yen certainly can’t hope for much monetary policy support from its own central bank, but it does seem likely to benefit at least briefly from gloomy trade headlines.