Australian Dollar May Fall on ECB After Brushing off Jobs Data

A rather brief streak of better-than-expected Australian economic data relative to forecasts was put to an end when May’s jobs report crossed the wires and sent AUD/USD cautiously lower. Heading into the release, the markets were expecting weaker employment gains and lower unemployment. What they got was the latter but not for the optimal reasons.

Australia’s unemployment rate dipped to 5.4 percent from 5.6, economists were looking for 5.5%. This was the lowest outcome since November 2017. Meanwhile the labor force participation rate edged lower to 65.5% unexpectedly from 65.6%, the lowest point since October 2017. This suggests that the lower unemployment rate was accompanied with discouraged workers exiting the worker force.

The amount of jobs gained also rose only by 12.0k, much lower than the 19.0k increase expected. In addition, the bulk of the gains were derived from the part time sector which amounted to +32.6k. The more favorable full time sector ended up losing 20.6k positions. However, in the aftermath of the data release the Australian Dollar pared its losses and was back to square one against its US counterpart.

This seemed to be due to general US Dollar weakness in the aftermath of Wednesday’s FOMC rate decision. There, the greenback fell as Chair Jerome Powell cooled some hawkish bets in his press conference, sending other currencies higher such as the Euro. With that in mind, attention now turns to the upcoming ECB rate decision. A disappointment in quantitative easing tapering expectations can reignite the greenback, sending its other high-yielding Australian counterpart lower. 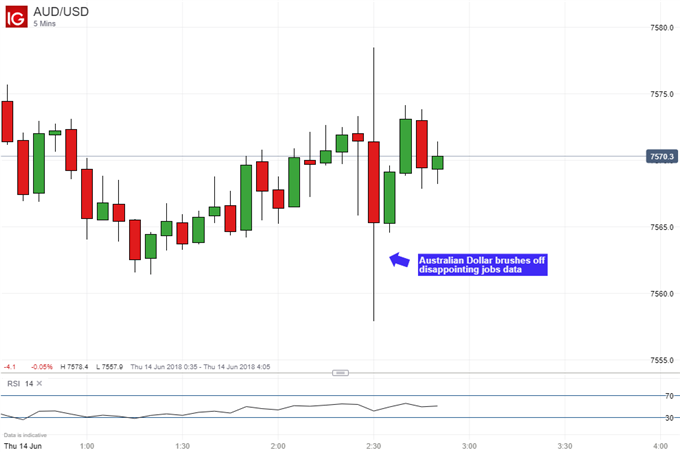 On a daily chart, AUD/USD remains wedged between key support and resistance levels. After its failed push above the February descending line, the pair has been slowly making its way lower to a rising support channel going back to early May.

From here, immediate resistance is 0.7591. A push above it exposes the February line which is closely aligned with the 0.7648 horizontal resistance area. Beyond that lies the trend line from January 2016. On the other hand, a push below support exposes the May 10 low at 0.7426. 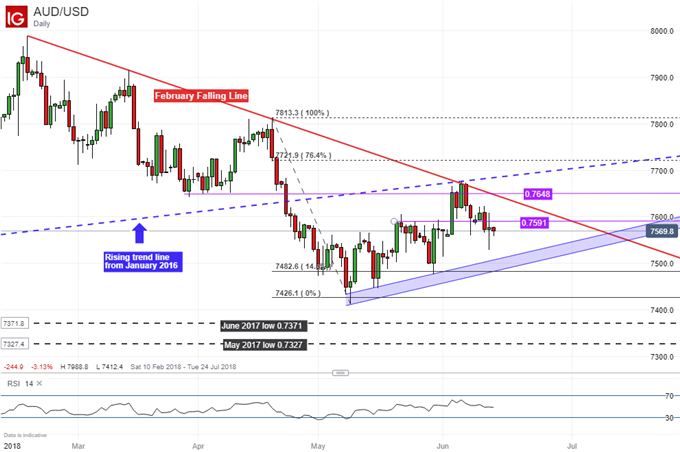