Asian stocks were in broad retreat Friday afternoon as investors fretted about both emerging markets and some of their developed counterparts.

The emerging market tensions centered on Brasil, where stocks and the real were under pressure Thursday. Recent opinion polls and a long, disruptive trucking strike has raised doubts that the government will be able to stick with its market friendly agenda. The developed market worries meanwhile involve the Group of 7 industrial democracies. They will meet this weekend in Quebec. A fractious get-together seems in prospect thanks to the confrontational trade approach being taken by US President Donald Trump.

The Nikkei 225 was down 0.5% with all other bourses lower. Australia’s ASX 200 was a whisker lower, but the Shanghai Composite lose more than 1%.

The US Dollar was a little weaker, largely thanks to a stronger Euro which came in turn on rising expectations that Eurozone monetary policy could yet be tightened. EUR/USD remains in its young uptrend channel, but the sharp falls of May 14 and 15 still look like tough work for the bulls. 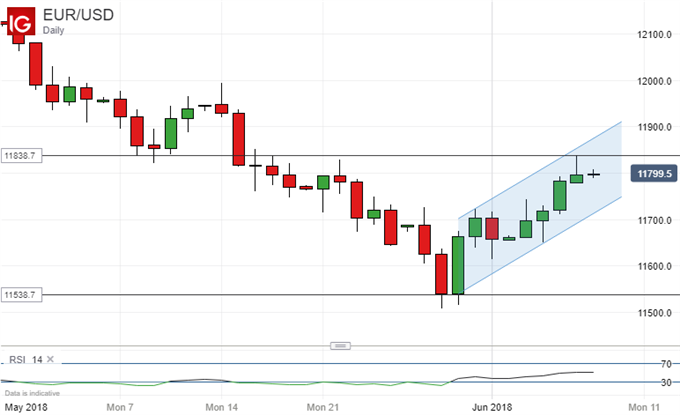 Euro Vs US Dollar, Daily Chart.

AUD/USD was already under a bit of pressure having failed earlier this week at key technical reistance despite some strong Australian growth data. Chinese trade numbers missed expectations which didn’t help the bulls’ flagging cause.

Gold prices were steady although the market was reportedly already looking towards next week’s US Federal Reserve monetary policy meeting at which rates are expected to rise again. Crude oil prices rose on ongoing worries about Venezuelan supply.

Still to come on Friday are the Bank of England’s inflation forecast and official employment data out of Japan.