- The Trump administration has decided that trade negotiations have proven fruitless and will go ahead with imposing tariffs on imported aluminum and steel from Canada, Mexico, and the EU.

- The imposition of tariffs will begin June 1; NAFTA negotiations are ongoing and exemptions for key trade partners could still be made at a later date.

- While a trade war with China may be on hold, the European Union seems poised to retaliate against the US measures.

The US Dollar has recovered its earlier losses following the announcement that the Trump administration would be moving forward with tariffs on aluminum and steel imports from its major trading partners, including Canada, Mexico, and the European Union.

The decision seems purely political, insofar as the Trump administration failed to secure any meaningful concessions from China during the recent trade spat, and so a ‘win’ elsewhere was likely sought after. Accordingly, despite the historical precedent for unilateral, protectionist trade measures to result in a weaker US Dollar, market participants are seemingly unmoved by the latest developments.

However, that is not to say that trade tensions won’t intensify further in the coming days and weeks. French Finance Minister Bruno Le Maire said that “Our US friends must know that if they were to take aggressive actions against Europe, Europe would not be without reaction.”

Similarly, EU Trade Commissioner Cecilia Malmstrom and Japanese Economy, Trade and Industry Minister Hiroshige Seko put out a joint statement on US tariff efforts, saying “This would cause serious turmoil in the global market and could lead to the demise of the multilateral trading system based on WTO rules.” 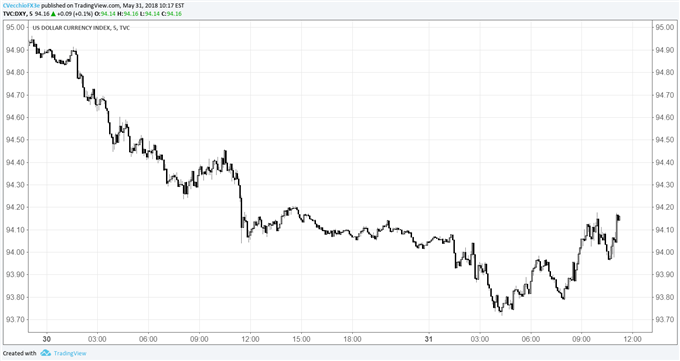 For now, the aluminum and steel tariff development is just one of several jarring developments to hit markets this week. Elsewhere, news of Italy’s government failing to form and signs that the Spanish prime minister may be removed from office by the end of the week have proven more instrumental in determining the direction of price action in the near-term. At the time of writing, the DXY Index traded at 94.16, up by +0.1% on the session.