Asian shares declined by Thursday afternoon as trade war fears unnerved investors yet again. This time it was a double whammy. First, US President Donald Trump ordered a Section 232 investigation which could lead to tariffs on imported vehicles of up to 25%. Second, his meeting with North Korean Leader Kim Jong Un on June 12th seemed more unlikely after a local diplomat criticized recent US deal proposals.

The Nikkei 225 was down more than one percent, weighed down by automakers such as Toyota and Honda. In China, the Shanghai Composite was little changed. South Korea’s KOSPI was down more than 0.4%. In Australia, the ASX 200 declined around 0.1% and was mostly held back by financials.

On the currency side of things, the anti-risk Japanese Yen was higher as traders sought safety. Meanwhile, the Canadian Dollar declined as Trump’s auto tariff probe placed more pressure on NAFTA negotiations. Towards the end of yesterday’s session, Canada’s Foreign Minister Chrystia Freeland said that there have been ‘significant’ progress on autos and in NAFTA talks overall.

Meanwhile, the Singapore Dollar showed a tepid response to a better-than-expected local GDP report as forecasted. Singapore’s economy expanded 1.7% q/q in the first quarter versus 1.6% estimated and the outlook for GDP was raised. The currency seemed more focused on risk trends rather.

Ahead, if European shares echo the losses in Asian shares, then the Japanese Yen could have more room to appreciate as well as the Swiss Franc. Bank of England’s Governor Mark Carney will also be speaking at 7:00 GMT. If he highlights the recent local inflation miss as an argument to reduce the urgency to raise rates, then the British Pound could fall.

The Nikkei 225 has broken below a rising trend line from late March after negative RSI divergence signaled that momentum to the upside was ebbing. This opens the door to further losses as well as the possibility of a reversal of its dominant uptrend. From here, a push below resistance at 22,397 exposes the 38.2% Fibonacci retracement at 21,995. On the other hand, immediate resistance is the 14.6% minor level at 22,645. 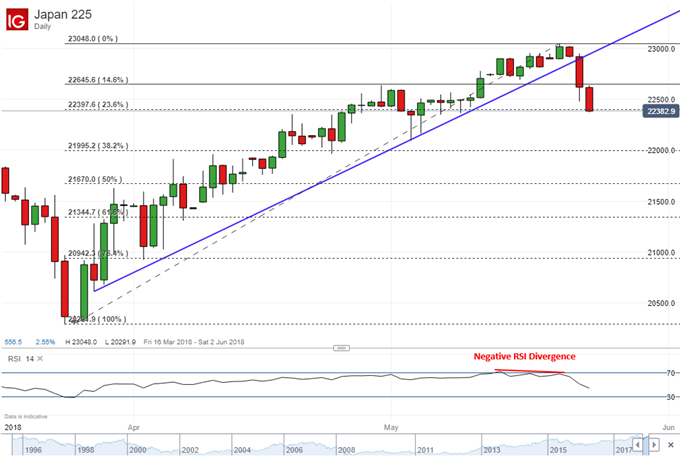