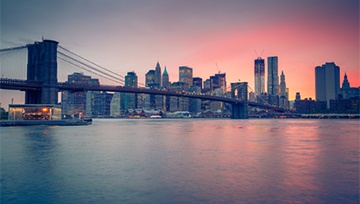 - Core inflation remained above 2% at 2.1% in April though slightly lower than the 2.2% expectation

- Fed’s Bostic mentioned yesterday the inflation is likely to overshoot for “awhile,” he was spot on with today's data

Headline and Core Inflation Remain Above 2%

Headline Inflation in April, measured by the Consumer Price Index (CPI), came in at 2.5% exactly as markets expected. The Bureau of Labor Statistics reported, that the biggest contributions to the headline print came from the indexes for gasoline and shelter, though the food index increased as well. Gasoline prices rose by 3% contributing to a 1.4% rise in the energy index. The shelter index rose by 0.3% as did the food prices. Additionally, core CPI (all items excluding food and energy) came up a bit below expectations at 2.1%. Other items that saw higher prices last month included householdfurnishings and operations, personal care, tobacco, medical care, and apparel. Conversely, transportation which included used cars and trucks, new vehicles, and airline prices all declined.

Notably, the all items index has been mostly trending upward since it was June 2017 when the index came in at 1.6%.

Below is an overview of all prices changes recorded through October 2017: 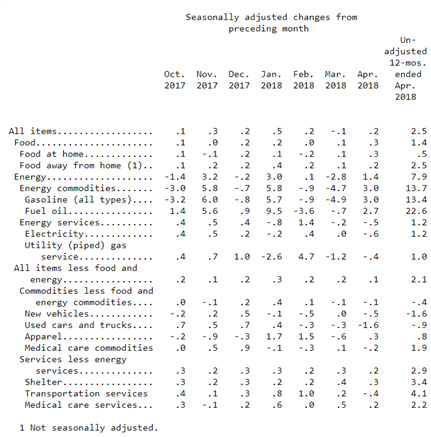 Today’s CPI report further confirms that inflation is coming in above the Fed’s 2% target. Though the Fed prefers the Personal Consumption Expenditure Index (PCE), the CPI data has been trending above 2%. Yesterday, Atlanta Fed President Raphael Bostic stated that “inflation is likely to run a bit above 2% for awhile” and that an inflation overshoot was not a problem for a policy. That said, we probably will not see any change in the Fed’s hawkish stance.

Below is a list of economic releases that has pulled the dollar lower:

April’s hawkish inflation data boosted NZD by about 0.65%. NZDUSD erased all loses from this morning and looks to reverse the move from yesterday’s SNB rate decision. NZDUSD settled around 0.6959 at the time that is was written.