The Australian Dollar wobbles sligthly on Tuesday after the release of official inflation data which missed expectations. It didn't move much, however, perhaps not surprisingly given the beating it has already suffered at the US Dollar's hands

Official Australian Consumer Price Index inflation for the first quarter of 2018 came in at 1.9% compared to the same period a year ago. The markets had expected a 2% gain, but the importance of this ostensibly modest miss was possibly exacerbated by the fact that an as-expected rise would have taken inflation back into the Reserve Bank of Australia’s 2-3% target band for the first time since January, 2017. As it was inflation stayed below the line.

The RBA frequently cites inflation weakness as being behind some of its antipathy toward raising the key Official Cash Rate from its 1.50% record low. It can now continue to do so for at least another three months, until second-quarter CPI numbers become available. The Australian Dollar was already under some pressure from its rampant US cousin, which is finding support in turn from rising Treasury yields. The overall backdrop of a Federal Reserve still keen to raise interest rates while other central banks (including the RBA) hang back has survived this data point. AUD/USD wasn’t hit any further by the numbers but signally failed to gain on them either.

Australian interest-rate futures markets currently don’t price any increase to the record low, 1.5% official cash rate until well into 2019 – in stark contrast with prognoses for a still-hiking Fed. Trade and growth worries spurred by rising oil prices have also weighed on the Aussie.

Indeed, AUD/USD is now below the 76.4% Fibonacci retracement of its rise from the lows of December up to January’s peaks, with little obvious strong support between it and a full negation of that rise. That would be seen on a fall to 0.7504. 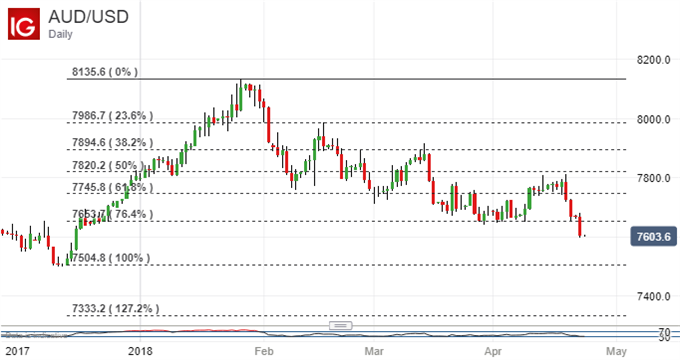