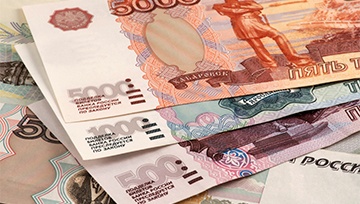 US AM Digest: Crude Oil Highest Since December 2014 on Geopolitical Tensions

US equity futures pointing to losses of 1% with the DJIA set to open lower by as much as 200 points. This follows the rising geopolitical tensions surrounding Syria, in which President Trump’s latest comments noted that US-led intervention through air strikes are coming.

US CPI: US inflation data for March largely in-line with market consensus, besides the month over month reading which slipped 0.1% compared with a modest 0.2% rise expected. Interestingly, average weekly earnings saw a noticeable rise to 0.9% from 0.6%. Ultimately, little reaction observed in the Dollar index or US equity futures. Focus now on the FOMC meeting minutes scheduled for 18:00GMT.

RUB: The Russian Ruble has endured a torrid time since the Trump administration announced new punitive sanctions on Russia on Fridayin response to alleged meddling in the 2016 US election. USDRUB has weakened over 12% with USDRUB surging from 57.50 to 65.00, which marks the highest level since November 2016. The view is that further sanctions on Russia may be on the way, which is likely to dent the already fragile Russian economy. Additionally, Russia’s involvement in Syria has also pressured the Ruble, with the US pledging ‘forceful’ action in response to suspected chemical attacks in Syria. This could potentially take shape in the form of US-led airstrikes; however, Russia has since warned that missiles from the US will be shot down, subsequently increasing the geopolitical tensions around the region. President Trump this morning added fuel to the fire after stating that strikes will be coming in Syria and Russia better get ready.

GBP: The Pound slipped this morning following a run of February data. UK Manufacturing, Construction and Industrial Production data printed below expectations with factory output declining for the first time since March 2017. Altogether, this data suggests that the Q1 UK GDP is likely to get off to a softer start, with recent PMI survey’s suggesting UK growth of around 0.3%. GBPUSD now trading at the mid-1.41s having tripped through the 1.4200 handle in the wake of the data. However, with the Bank of England expected the hike interest rates next month, this could keep Sterling supported.

Crude Oil: WTI and Brent surging over 1% this morning with the latter now trading at the highest level in over three years having hit a high of $71.96. Geopolitical risk premium seemingly returning for oil prices amid reports of a potential US-led airstrike in Syria, which would be in-line with the Trump administrations anti-Iran strategy. Another bullish impetus for oil markets came after the EIA forecast a slight reduction in US oil production, while also revising higher their oil demand estimates. 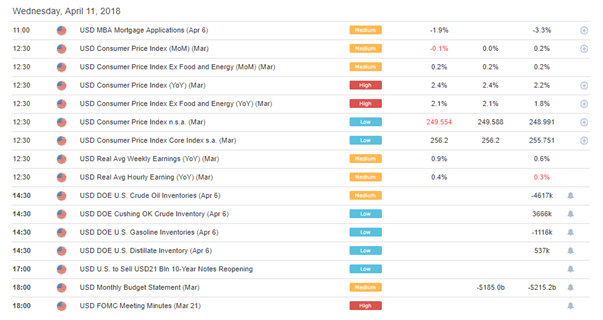 With a bulk of the US data out of the way, focus will be on the FOMC meeting minutes scheduled for release at 18:00GMT. At the March meeting, the FOMC hiked the Federal Funds Rate by 25bps to 1.50-1.75%, while the dot plot continued to show that the majority of members saw three rate hikes for this year, despite the Fed raising its view of the number of rate hikes across the forecast horizon (8 hikes from 7 hikes). Given the backdrop of trade wars and surging short term interest rates (Libor) stoking turbulence in financial markets and tightening credit conditions, investors will be placing close attention to any mention of these subject matters and its impact on the central banks outlook.

Elsewhere, Oil traders will be keeping an eye on the weekly DoE crude oil inventory report due out at 14:30GMT. As a reminder, yesterday’s API crude report showed a headline build of 1.758mln barrels against expectations of a 200k barrel drawdown. As is usually the case, attention will also be placed on US crude production, which last week rose 0.26% to 10.46mln bpd. 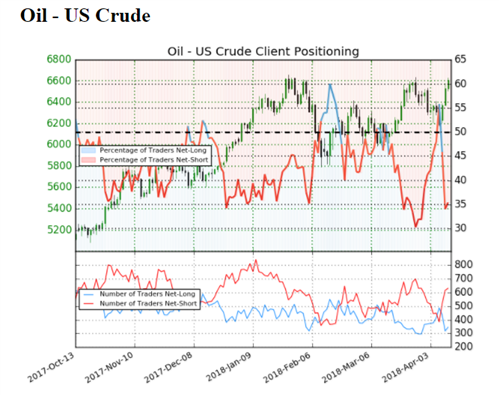